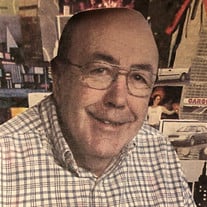 Alvin Thomas “Tom” Ludwig, 78 of Scott Depot, WV passed away on December 5, 2020 at CAMC General Hospital, Charleston WV, with his family at his side. Tom was born to the late Lawrence D. and Olive Augsburger Ludwig on April 13, 1942 in Bera, Ohio. He was also preceded in death by his brothers, Ivan and Ronnie; sister, Jeanette. Tom was a former air traffic controller and bank examiner for FDIC out of Charleston, WV until he retired. He was head of AARP for WV for ten years. He attended University of Cincinnati and graduated from Baldwin-Wallace in Ohio. Tom was a very active member of Winfield United Methodist Church as well as his past church of St. John’s United Methodist Church, Scott Depot. Tom proudly served his country in the United States Air Force. Tom enjoyed doing yard work and reaching out to anyone that needed his help. He was also a HUGE Cincinnati Reds fan. Surviving him are: his loving wife of 52 years, Sue Ludwig; sons: Greg and Lori Ludwig of Hurricane, Gary and Gina Ludwig of Leon, WV, Doug and Tracy Ludwig of Glen Jean WV; grandchildren, James, Shelby, Joshua, Jackson, Jacob, Jeremy and Elizabeth; great grandson, Easton Ludwig. Funeral service for Tom Ludwig will be 1:00pm Wednesday, December 9, 2020 at Chapman Funeral Home, Hurricane WV with Rev. Frank “Tex” Frye officiating. Burial will follow in Valley View Memorial Park, Hurricane WV. Friends may visit the family one hour prior to the service at the funeral home. Anyone wishing to leave an online condolence or memory may do so by visiting his tribute page at www.chapmanfuneralhomes.com. Chapman Funeral Home, 3941 Teays Valley Road, Hurricane WV 25526 is honored to handle Mr. Ludwig’s arrangements.

Alvin Thomas &#8220;Tom&#8221; Ludwig, 78 of Scott Depot, WV passed away on December 5, 2020 at CAMC General Hospital, Charleston WV, with his family at his side. Tom was born to the late Lawrence D. and Olive Augsburger Ludwig on April 13,... View Obituary & Service Information

The family of Alvin Thomas "Tom" Ludwig created this Life Tributes page to make it easy to share your memories.

Send flowers to the Ludwig family.