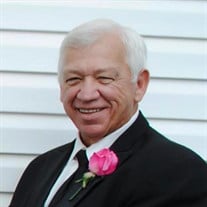 Benjamin “Butch” Hensley, Jr., 70, of Winfield, WV went home to be with the Lord on Friday, September 10, 2021. Born June 27, 1951 in South Charleston, he was the son of the late Ota Mae and Benjamin Hensley. He was also preceded in death by his sister Doris Lilly and brothers-in-law William Gill and Gary Smith. He is survived by his children, Amy West (Matt), Allison Hensley (Chris), and Adam Hensley (Jessie); grandchildren Addison, Jackson, Lillian, Austin, Tyler, and Paige; siblings Roger Hensley (Lynn), Garnett Gill, and Ann Smith; and numerous nieces and nephews. Butch graduated from Winfield High School in 1969 where he was an accomplished athlete in football, basketball, baseball, and track. He played many roles over the years including small business owner, coach, comedian, Christian, and loving father, friend, husband, and brother. Butch was known for his big stories, big laughs, and even bigger heart. He will be remembered fondly by many that were touched by his generosity and fun-loving spirit. A memorial service will be held at 3pm on Friday, September 17, 2021 at Chapman Funeral Home in Winfield, WV. Visitation will begin at 2pm. Per the family’s request Masks are Required. You may visit his tribute page at ChapmanFuneralHomes.com to share memories and offer condolences to the family. Chapman Funeral Home, family-owned and located at 12848 Winfield Road, Winfield, WV 25213 is honored to serve the Hensley family.

The family of Benjamin "Butch" Hensley Jr. created this Life Tributes page to make it easy to share your memories.

Send flowers to the Hensley family.