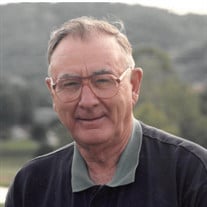 Bill Walker Walls, 96, of Scott Depot WV, passed away on January 26, 2022 at CAMC Memorial Hospital, Charleston, WV. He was born in Frame WV, on Feb. 18, 1925 to the late Ernest and Mabel Douglas Walls. In addition to his parents, he was preceded in death by his sister Ruth, and 3 brothers, Bob, Frank, and Jim. After high school graduation, Bill, like many young men at that time, served in World War II to protect our country and freedoms. As a U.S. Navy sailor, his service took him to the Pacific war effort in Okinawa. He returned home April 14, 1946 and on November 4, 1946 began a long work history with E.I. DuPont in Belle, WV. He was an Electrical - Instrument Technician, and a Safety Consultant at the time of retirement. He carpooled with local neighbors and traveled over fifty miles each day to get to and from his job at the plant, Monday through Friday. He was dedicated to his work at the company and was always eager to learn and move-up. After 36 years, he retired in December, 1982. While living at Frame and Elkview, WV, Bill enjoyed hunting with the Eden’s family at their cabin in Randolph County. Also, he and wife Norma enjoyed traveling to their camp on Becky’s Creek in the WV mountains to relax and visit with folks who lived nearby. Sports, especially baseball, were a passion in Bill’s life. He would often go with a buddy to watch the minor league teams play at Wyatt Powell Park. He was always excited in the spring as Major League baseball opened the new season. Near mid-life, he grew to love golf. He would spend many evening and weekend hours at the former Meadowbrook Country Golf Club. After retirement he played at Scarlett Oaks, many West Virginia golf courses and in Myrtle Beach, S.C. with his favorite golfing partner Norma. They also traveled throughout the western U.S. and New England states and Canada. Bill’s greatest pride and joy was his family. He is survived by his loving wife of 74 years, Norma Jean O’Dell Walls. His children: Patricia Ann Walls Stone (Bill) of Kingwood WV, Sharon Kay Walls Williams (Eddie) of Ireland WV, and William Michael Walls (Jamie) of Scott Depot WV. He is also survived by his grandchildren: Kristan, Vanessa, Eric, Karrah, Ryan, Lara, Corey and Dustin, as well as, 12 great-grandchildren. Bill will be honored by a private family service and will be laid to rest at Elk Hills Memorial Park, Big Chimney, WV. Anyone wishing to leave the family an online memory or condolence may do so by visiting Bill’s tribute page at, www.chapmanfuneralhomes.com. Chapman Funeral Home, 3941 Teays Valley Road Hurricane WV 25526 is honored to serve the Walls family.

Bill Walker Walls, 96, of Scott Depot WV, passed away on January 26, 2022 at CAMC Memorial Hospital, Charleston, WV. He was born in Frame WV, on Feb. 18, 1925 to the late Ernest and Mabel Douglas Walls. In addition to his parents, he was preceded... View Obituary & Service Information

The family of Bill W. Walls created this Life Tributes page to make it easy to share your memories.

Send flowers to the Walls family.