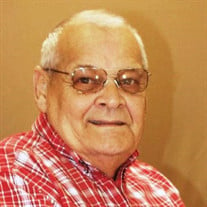 Pastor Billy Ray Kersey, 73, of Liberty went home to be with the Lord on January 6, 2019 at Hubbard Hospice House West, South Charleston. He was born on September 19, 1945 to the late Robert and Lessie Kersey. He is preceded in death by his... View Obituary & Service Information

The family of Billy Ray Kersey created this Life Tributes page to make it easy to share your memories.

Pastor Billy Ray Kersey, 73, of Liberty went home to be with...

Send flowers to the Kersey family.