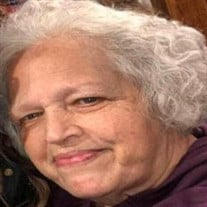 Brenda J. (Stegel) Nester passed away peacefully in the early morning hours of May 12, 2019, at the Hubbard Hospice Center in South Charleston with her loving family by her side. Born in Oak Hill on November 13, 1940, she was daughter of the late Rev. Louie and Evelyn Stegel. She was preceded in death by her husband Kenneth, son Edward, daughter Cindy, grandson Kenny, brothers Darryl, Gary, and Roger Stegel, nephew Darryl Stegel Jr., and sister-in-law Claudia Stegel. She is survived by her daughter, Terra of Cross Lanes, son John Sr (Michelle) of Teays Valley, daughter Jennifer Bailey Adams (Charles) of Cross Lanes, daughter-in-law Janet of Scott Depot, grandsons Anthony Nester (Mindy) of Winfield, Petty Officer 3rd Class John Nester Jr of Oceana, VA, Brandon (Heather) Nester of Scott Depot, and Justin Shank of Cross Lanes, granddaughters Brenda Nester and fiancé Alisha of Cross Lanes, Danielle Ross of Cross Lanes, great-grandsons Mason, Wyatt, Brycen, Kennan, and Charles Jr., great-granddaughters Esabella, Addison, Payton, Samantha, Ameila, and Aubree, brother Damon of Chattanooga Tn, sisters Ann (Orville) James and Connie Ferguson of Oak Hill, sisters-in-law Jeannie of Oak Hill and Dixie of Beckley, several nieces, nephews and many friends. Mom graduated from Oak Hill High School in 1958. Her first job was working for the Fayette Tribune as typist and an editor. She began working extremely long hours for the Shopping Guide in Nitro as a printing specialist. After moving to Nitro, she worked full time for BB&T bank in Charleston as a secretary typing an astounding 120 wpm without error during the day and continued her work for the Shopping Guide in the evening hours. Her work effort ceased on February 14th, 1991 when her daughter Cindy was left with a severe brain injury due to an automobile accident. For the next 22 years, along with her other daughter Terra, provided 24-hour non-stop care for Cindy enabling her to sustain a quality of life that would have been non-existent had she been placed in a long-term care facility. Well, the harps are finally sounding, the bells are ringing, and the angels are singing with the arrival of heaven’s newest spirit. A woman with extraordinary values and principles, Brenda was the definition of absolute achievement as a wife, mother, grandmother, daughter, sister, and aunt. Mom was the person who gave and never asked for anything in return. Jesus had opened arms in anticipation for one of his most loyal servants of this earth. The illumination of the stars on the night of her passing is a testament to her kindness and devotion to God, her family, and any stranger who made her acquaintance. She treasured her family and embraced every moment with them. Mom held such a vivacious personality expanding her warmth and love to all those around her. Funeral service will be held at 1pm Wednesday, May 15, 2019 at Chapman Funeral Home, Hurricane. Visitation will be held one hour prior to the service. You may also visit her Tribute page at ChapmanFuneralHomes.com to share your memories with the family. Graveside service will be held at 3:30pm Wednesday at Highlawn Memorial Park, Oak Hill. Chapman Funeral Homes, family-owned and located at 3941 Teays Valley Road, Hurricane is honored to serve the Nester family.

Brenda J. (Stegel) Nester passed away peacefully in the early morning hours of May 12, 2019, at the Hubbard Hospice Center in South Charleston with her loving family by her side. Born in Oak Hill on November 13, 1940, she was daughter of the... View Obituary & Service Information

The family of Brenda J. Nester created this Life Tributes page to make it easy to share your memories.

Brenda J. (Stegel) Nester passed away peacefully in the early...

Send flowers to the Nester family.