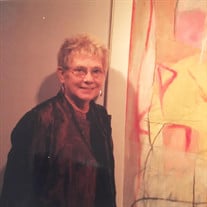 Caryl Sue (Butterbaugh) Toth, 84, of Hurricane, WV died peacefully at home on Thursday, February 18th, 2021. She is preceded in death by her parents Eugene E. Butterbaugh and Nancy L. Meyers and by her husband, Dr. Powell E. Toth. In addition, she was preceded in death by her sister Patricia Kyle and grandson, Bryce Toth. She earned her BA in 1972 and her MA in 1974, both from Marshall University. She began her teaching career as a part-time art instructor in 1973 at Marshall University and as an art teacher for Putnam County Elementary Schools. As her teaching career progressed, she became the teacher of the intellectually gifted for Putnam County Schools and then became the teacher of the Artistically Gifted for Putnam County Schools until her retirement in 2002. Her professional career also included other positions such as designer/planner of the West Virginia Permanent Collection Exhibition at the West Virginia Cultural Center and co-founder of the Museum in the Community in Winfield, WV. She is well known in the art community in West Virginia and beyond for her many accomplishments, exhibits, and awards in art. She has held several solo exhibits at the Art Store in Charleston, WV and elsewhere in West Virginia along with solo exhibits at Maxine Gold Gallery in Mill Valley, CA and Delaware Center for Contemporary Arts in Wilmington, DL. She also participated in numerous juried shows and won several awards for her work, including the Governor’s award in 1985 and 1993 as part of the WV Juried Exhibition at the WV Cultural Center. Other juried exhibitions she participated in were in several states across the country. She had a passion for life and remained active in the art community very late in life. She is survived by her children Matthew Toth (Debra) of Atlanta, GA, Amy Booth of Hurricane WV, and Carrie Dugan (Jerry) of Copley, OH; grandchildren, Logan (Greg), Cassidy (Julia), Skylar, Emma, Anna (Stuart), Samuel, Jerry, and Matthew; great-grandchildren, Camden, Ryland, Elliot, Pia, and Poppie; sister, Nancy Liffick of Waynesville, OH, and brother, Eric Butterbaugh of Waynesville, OH. A graveside service will be held later in the year when she will be laid to rest with her beloved husband, Powell. In lieu of flowers, donations are encouraged to be made to the Susan G. Komen Foundation and HospiceCare West Virginia.

The family of Caryl Sue Toth created this Life Tributes page to make it easy to share your memories.

Send flowers to the Toth family.