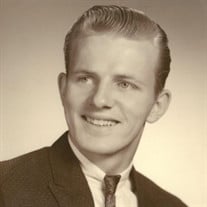 Charles N. Barrett, 76, of Hurricane, West Virginia, passed away on May 5, 2020 after an extended illness. He leaves behind his wife of 52 years, Nancy (nee Everson), formerly of East Bend, Barbour County, West Virginia. He is also survived by his son and daughter-in-law, Kenneth and Melinda of Arlington, Virginia; two adult grandchildren, Kaitlin and Jonathan, and youngest granddaughter, Lillian. He was preceded in death by his parents, Walter and Edna of Washington, D.C., two brothers, Donald and Robert, and one sister, Francis. Mr. Barrett, “Chic” to his friends and family, was born and raised in Washington, D.C., and a 1963 graduate of Frank W. Ballou Senior High School. After graduation, Chic spent 4 years in the U.S. Army, followed by 20 years of service as a Police Officer in the Washington, D.C., Metropolitan Police Department. Chic spent much of this time in the Canine Corps before retiring 1987. Chic then moved to West Virginia to be near Nancy’s family, becoming active in many Churches of Christ as an Elder and a Preacher, often supporting and uplifting smaller congregations as a fill-in minister. Chic is remembered as an outgoing and kind man, much admired and loved by his family and members of the Church. He improved the lives of countless people in more than 50 years of service to his God, his Country, and the community. Memorial service will be held at Chapman Funeral Home in Hurricane, West Virginia, on May 9th, at 2:00 PM, followed by internment at Valley View Memorial Park. Visitation will precede the memorial service, beginning at 12:30 PM. Please visit his tribute page at ChapmanFuneralHomes.com to share memories, offer condolences and view social distancing policies during the services. Flowers can be sent to the funeral home or donations can be made in his name to the West Virginia School of Preaching in Moundsville, West Virginia. Chapman Funeral Homes and Crematory, family-owned and located at 3941 Teays Valley Road, Hurricane is honored to serve the Barrett family.

Charles N. Barrett, 76, of Hurricane, West Virginia, passed away on May 5, 2020 after an extended illness. He leaves behind his wife of 52 years, Nancy (nee Everson), formerly of East Bend, Barbour County, West Virginia. He is also survived... View Obituary & Service Information

The family of Charles N. Barrett created this Life Tributes page to make it easy to share your memories.