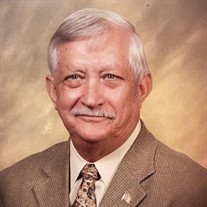 Charles Tracy Surface, 88 of Cross Lanes went home to be with the Lord on Monday June 28, 2021. Born December 9, 1932 in Bluefield, WV, Charles was the last surviving child of the late Frank Edward Surface and Jeanette Carter Surface. In addition to his parents, he was preceded in death by siblings; William Surface, George Surface, Donald Surface, John Surface, Kelly Surface and Evelyn Sizemore. Charles loved the Lord, his family and being a truck driver, in that order. At an early age, Charles began driving trucks for his family business, Surface Banana Company. Charles helped expand the family business as a route salesman/manager and he started new operations in Charleston, Huntington and Abington, Va. He then worked for 20 years with Union Carbide Trucking Operations before starting his own trucking company, which he still operated and drove for until he was 80 years old. His family would often marvel at his work ethic, but Charles always remained a humble man of God and a man of prayer. He credited all his achievements to the Lord. Charles was awarded numerous safe driving awards during his career, including 2 million miles without an accident. During his life he had several encounters with death, when God protected him. He was one truck away from losing his life in the Silver Bridge collapse, was stung by a deadly scorpion while unloading bananas and blinded by hazardous chemicals while changing hoses from his tanker truck. Charles travelled many miles during his lifetime and his truck was his sanctuary for prayer and time with Jesus. Charles was a sweet man that modeled the life of Christ and followed the great commandment/commission of loving God and loving his neighbor. He was a faithful member of Teays Valley Church of God. He loved worshipping God at church services and fellowshipping with brothers and sisters in Christ. In his younger years he enjoyed Men’s group, attending church conferences and teaching Sunday School. One of his spiritual highlights was travelling to Israel with Kay and being baptized in the Jordan River. He also enjoyed riding the trails with his sons and family beach vacations with Kay, Duana and the boys. Charles loved being Papa to his 4 grandchildren and he taught them all to love God and family and to work hard. He is survived by his beloved wife of 60 years, Kay; children, Duana Barnett (Bill) of Hillsboro, WV, Tracy Surface (Linda) of Hurricane and Rusty Surface (Joyce) of Hurricane; grandchildren, Ryanne, Kaylen, Trent and Maria and baby Surface on the way. Funeral service will be held at 12:00pm Thursday, July 1, 2021 at Chapman Funeral Home, Hurricane with Rev. Dr. Melissa Pratt and Rev. Larry Hammett officiating. Burial will follow at Montgomery Memorial Park, London, WV. Visitation will be one hour prior to the service, Thursday at the funeral home. You may share memories of Charles by visiting his tribute page at ChapmanFuneralHomes.com Chapman Funeral Home, family-owned and located at 3941 Teays Valley Road, Hurricane is honored to serve the Surface family.

Charles Tracy Surface, 88 of Cross Lanes went home to be with the Lord on Monday June 28, 2021. Born December 9, 1932 in Bluefield, WV, Charles was the last surviving child of the late Frank Edward Surface and Jeanette Carter Surface. In addition... View Obituary & Service Information

The family of Charles Tracy Surface created this Life Tributes page to make it easy to share your memories.

Charles Tracy Surface, 88 of Cross Lanes went home to be with...

Send flowers to the Surface family.