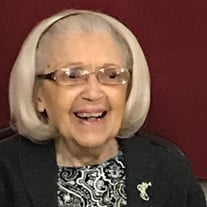 Concetta Gentile Coria (Connie) of Scott Depot, WV, passed away peacefully on Sunday afternoon, July 26, 2020 at the age of 103. Connie was born in Waterbury, Connecticut on December 8, 1916 to the late Sebastiano and Santa Gentile. In addition... View Obituary & Service Information

The family of Concetta Gentile "Connie" Coria created this Life Tributes page to make it easy to share your memories.

Send flowers to the Coria family.