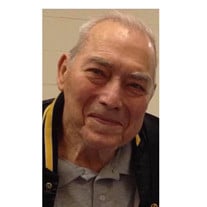 Dale Vernon Holsopple, 90, of Hurricane, passed away Tuesday, February 26, 2019. Born December 15, 1928, in Flinton, PA, Dale was the son of the late Freeman V. Holsopple and Grace Hahn Holsopple. He was also preceded in death by his wife, Norma, and brothers, Leon and Charles. He was a graduate of Beaver High School, Bluefield, West Virginia, class of 1947. He became an Eagle Scout in 1943 and served as District Executive for McDowell County and transferred to the Buckskin Council in Charleston. He was camp director at Dilley’s Mill in Pocahontas County for many years. In 1970, Dale retired from the Boy Scouts of America as a rural field director. Dale had a love for flying, especially a Piper Cub J-3. He earned his FAA private pilot's license at age 18. He helped organize the Bluefield/Princeton Civil Air Patrol and served as a liaison pilot. Dale was a charter member of St. John United Methodist Church, Scott Depot. He is survived by his children, Vicki Morris (Grover) of Princeton, Dwight Holsopple of Tornado, Marsha Brown (Winston) of Fraziers Bottom, Bruce Holsopple (Tina) of Hurricane and Nancy Morse (Gary) of Bartlett, TN, also 17 grandchildren and 13 great-grandchildren. Visitation will be from 6 to 8 p.m. Friday at Chapman Funeral Home, Hurricane. A graveside service will be held at 2 p.m. Saturday, March 2, at Cunningham Memorial Park, Lower Mausoleum Chapel, St. Albans. In lieu of flowers, donations are encouraged to St. Jude Children's Research Hospital. You may share memories of Dale by visiting his tribute page at ChapmanFuneralHomes.com. Chapman Funeral Home, family-owned and located at 3941 Teays Valley Road, Hurricane, is honored to serve the Holsopple family.

Dale Vernon Holsopple, 90, of Hurricane, passed away Tuesday, February 26, 2019. Born December 15, 1928, in Flinton, PA, Dale was the son of the late Freeman V. Holsopple and Grace Hahn Holsopple. He was also preceded in death by his wife,... View Obituary & Service Information

The family of Dale Vernon Holsopple created this Life Tributes page to make it easy to share your memories.

Send flowers to the Holsopple family.