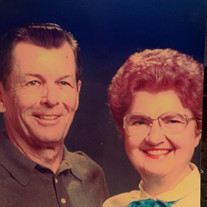 Edgar Alfred Dumont, Jr. of Scott Depot, passed away Monday October 26, 2020 at Hubbard Hospice House, Charleston. Eddie, the son of Edgar and Virginia Nell (Jarvis) Dumont was born May 29, 1921. He was born at the home of his Belgian grandparents; Camille and Marie (Gillot) Dumont, who lived at 222 Ninth Avenue in South Charleston, West Virginia. Eddie followed in the footsteps of his Belgian grandparents. Grandmother Dumont taught all of her grandchildren the importance of saving money and Eddie faithfully followed her teaching. He started working as a caddy at Kanawha Country Club where he met many important Carbiders. One of them helped him get a job at Union Carbide after he graduated from South Charleston High School in 1939. After bombing of Pearl Harbor on December 7, 191, Eddie joined the U.S. Naval Air Force. He served as a bombardier in the Navy Bombing Squadron 111, the only Navy B-24 Squadron to serve in both the Atlantic and Pacific theaters of operation during World War II. Chief Petty Officer Edgar A. Dumont was awarded the Distinguished Flying Cross and five Air Medals. Eddie returned safely and went back to work at Union Carbide, where he met his future bride Bette Dale Anderson. Bette, born October 23, 1923 in Huntington, WV was the daughter of Henry Clay Anderson Jr. and Anna Susan Gillespie. Bette had two brothers, Oscar Lee and Henry Clay Anderson Jr. and one sister Mary Joan Anderson. After Bette’s father, a fireman for C&O Railroad Company, was killed in a train wreck, Bette and her brother Oscar went to live with her Aunt Molly (Anderson) and Uncle Emmet Gabbert. Bette graduated from Charleston High School in 1942 and went to work at Union Carbide in the Accounting Department. Eddie and Bette were married in 1947 and moved to Maplewood Estates, Scott Depot in 1966. They both continued to work at Union Carbide. Eddie worked as Maintenance Supervisor in Location 514 and retired in 1986 with 45 years of service. Bette retired in 1984 with 41 years of service. After retirement, they loved to travel and spent many vacations in Hawaii and took Caribbean cruises. They were charter members of the Tri-County YMCA and exercised there 3 days a week. Bette passed away March 30, 2018 at Bellville Nursing Home, Scott Depot. Her burial service was held April 2, 2018 at Sunset Memorial Park, South Charleston, WV. Eddie was also predeceased by his two brothers, John Wesley Dumont of Peterstown, WV and Robert Lee Dumont of South Charleston, WV and sisters, Mary Jean French of Charleston, WV and Alice Floyd Bishop of Hattiesburg, Mississippi. He is survived by one sister, Virginia Nell Gillespie of Hurricane, WV and sister-in-law, Nell Dumont of Peterstown, WV. A private family service will be held and Eddie will be laid to rest with Bette at Sunset Memorial Park, South Charleston. You may share memories of Eddie by visiting his tribute page at ChapmanFuneralHomes.com Chapman Funeral Home, Hurricane is honored to serve the Dumont family.

Edgar Alfred Dumont, Jr. of Scott Depot, passed away Monday October 26, 2020 at Hubbard Hospice House, Charleston. Eddie, the son of Edgar and Virginia Nell (Jarvis) Dumont was born May 29, 1921. He was born at the home of his Belgian grandparents;... View Obituary & Service Information

The family of Edgar Alfred Dumont Jr. created this Life Tributes page to make it easy to share your memories.

Send flowers to the Dumont family.