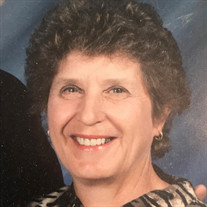 Ella Louise Lambrechts, 83, of Richmond, VA, passed away suddenly on September 20. She was born to Walter and Ruth Miller in Columbia Township, NC, and was one of seven siblings. She grew up in Switchback, WV, and was a co-valedictorian student at Elkhorn High School. She graduated high school in 1953, and then attended nursing training at Charleston General Hospital in Charleston, WV. It was there that she met her future husband of 55 years, pediatrician Dr. Marcel Lambrechts, who had immigrated to the United States in 1955 from Belgium. She married Marcel in 1957, and was married until his passing in 2012. Louise joined the Catholic faith during her engagement and lived her life first as a member of Sacred Heart Church in Charleston for 30 years, and for over her last 30 years Ascension Catholic Church in Hurricane, WV. As a new bride, and soon a mother of four children, she left nursing and devoted her life as a loving wife and mother to her spouse and family, and volunteered much time to Sacred Heart School. Louise loved being involved in all family activities. She took up golf with her husband, and became an avid and accomplished golfer for over 50 years, first at Berry Hills Country Club, then in later years at Sleepy Hollow Golf Club. She always enjoyed the story of the family’s trip to Myrtle Beach being delayed a couple of days as she unexpectedly kept winning match after match in a Club Championship tournament at Berry Hills, and the family was waiting outside the club house with a loaded car waiting for her as she won the match final. Louise was an avid reader, and by third or fourth grade she had read all the books in the school library. The librarian went out of her way to get more books in from the high school to help her with her passion. She loved music and was a member of her high school band, and in later years was always on the dance floor with her husband and could dance to any dance style a band would play. She became fluent in the French language and was able to entertain the numerous French relatives and guests that visited the area. She enjoyed cooking and learned many French recipes from her Belgian mother-in-law, and many friends, including her children’s friends, often looked for an invitation to stay for dinner. She was actively involved in her husband’s passion in nutrition, took her vitamins religiously, and during her last 7 years it was realized that she never had a cold or any sickness. Louise is survived by her son Michel Lambrechts and his wife Beth Anne of Evesham, NJ, her son Dr. Marcel Lambrechts and his wife Susan of Richmond, VA. Additionally, she raised two daughters Yvonne Lambrechts Orlandi, and Suzy Lambrechts. She struggled with the losses of her daughters Suzy in 1981 in a tragic accident, and Yvonne in 1994. She remained close to Yvonne’s husband Joe Orlandi, and then his current wife, Mary Mason Orlandi who adopted Louise as a family member and second mother. She is survived by six grandchildren, Christina and Gino Orlandi of Savannah, GA, Andrew and Kitty Lambrechts of Richmond, VA, and Zack and Mary Lambrechts of Evesham, NJ. She is survived by two great-grandchildren, and is also survived by her sister Dottie Miller Snyder who lives in Edgewater, MD. During Louise’s last several years, her family gives thanks to all the people that looked after her including Joe and Mary Orlandi of Nitro, Mike and Carla Holstein of Hurricane, Jim and Betty Corsaro of Hurricane, Steve and Sharon Gillespie of Hurricane, her many friends in the Oakbridge Community in Hurricane, and her smoking section friends at the Imperial Plaza in Richmond who even went out of their way to put a name plaque over her special bench that she visited with them every day. A Mass of Christian Burial will be held at Ascension Catholic Church in Hurricane, WV, on October 5th at 11:30 AM, followed by a reception at the church at 12:30. The burial will be after the reception in the Mt. Olivet Catholic section of the Spring Hill Cemetery in Charleston. In lieu of flowers, donations to the American Cancer Society would be appreciated.

Ella Louise Lambrechts, 83, of Richmond, VA, passed away suddenly on September 20. She was born to Walter and Ruth Miller in Columbia Township, NC, and was one of seven siblings. She grew up in Switchback, WV, and was a co-valedictorian... View Obituary & Service Information

The family of Ella Louise Lambrechts created this Life Tributes page to make it easy to share your memories.

Send flowers to the Lambrechts family.