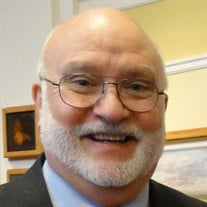 George D. Six, age 70, died at home on April 13, 2019 following a wonderful life. He was born July 16, 1948, in Akron General Hospital, Summit County, Ohio to the late Fred and Lena I. Six. He attended and graduated from Hempfield Area High School in 1966. George served in the US Army, during the Vietnam Conflict, 1971-1973 and was stationed at Picatinny Arsenal, NJ. He attained the rank of Specialist Fifth Class and worked designing fuses for weapons. On September 5, 1970, he was united in marriage to Jennifer Fay Six in Belle, WV. Mr. Six graduated from West Virginia University, Morgantown, WV, in 1971 with a B.S. Degree in Electrical Engineering. He was a Registered Professional Engineer. George’s career with AEP started at General James M. Gavin Plant in 1973 as a performance engineer. Assisting with the start-up of two 1300 MW units and numerous plant assignments prepared him for a position in the Operations Department in 1983, and eventually gaining him the position of Operations Superintendent in 1987. He served in that capacity through the construction and initial operation of the Gavin Scrubbers. In October of 1995 George moved to the AEP-Simulator Learning Center (SLC) as Manager. He worked there till his retirement on August 31, 2007. George was instrumental in starting the Power Plant Technician Degree program at West Virginia State Community and Technical College. In retirement, George enjoyed travelling with Jennifer, completing various genealogical research, playing the stock market, and loving life. George was not a member of any organized religion. He had his own eternal faith of the world and life. He was a member of several Rotary Clubs, over his 40-year membership. He served as club president in Point Pleasant, WV in 1983-1984. His last club was the St. Albans Rotary Club, serving as club secretary in 2004-2006. George is survived by the love of his life, Jennifer Shoemaker Six. There will be no viewing or funeral services for George D. Six. By his choice, he will be cremated. Relatives and friends should remember him as they knew him, for as long as we are remembered we still exist. You may share memories of George by visiting his tribute page at ChapmanFuneralHomes.com. Cards or letters of remembrance may be sent to Jennifer, care of the funeral home. Chapman Funeral Home, family-owned and located at 3941 Teays Valley Road, Hurricane is honored to serve the Six family.

The family of George D. Six created this Life Tributes page to make it easy to share your memories.

Send flowers to the Six family.