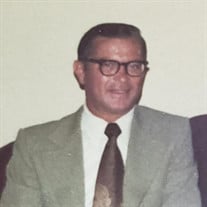 George Raymond Stringer, 90, from Scott Depot, WV, passed away peacefully on September 12, 2021 with his family at his side. Ray was born on August 17, 1931 in Bloomingdale, Ohio. Survivors include his beloved wife and best friend of 69 years, Barbara Donley Stringer, his four children and their spouses George Raymond Stringer, Jr. (Diane) of West Brandywine, Pa, Charles Douglas Stringer (Kendra) of Hudson, Fl, Linda Stringer Dell' Olio (Michael) of North Plainfield, NJ, and Gail Stringer Trupo (Frank) of Scott Depot, WV. Ray had 13 grandchildren--Garrett, Tara, Adam, Jesse, Zachary, Nathanael, Veronica, Christine, Katelyn, Emily, Stephanie, Thomas and Joseph. He also had 15 great grandchildren with another on the way and two step great-grandchildren. Ray was predeceased by his father George Franklin Stringer, mother Elizabeth Virginia Oliver Stringer, brother Burns M. Stringer, and sister Clara R. Stringer. He had many brothers-in-law and sisters-in-law, nieces and nephews, and many great and great-great nieces and nephews. Ray was raised on a farm in Ohio until the family moved to Cadiz, Ohio when he was in high school. After high school, Ray attended and graduated from Muskingum College in Ohio with double major degrees in chemistry and math. He was a standout football, basketball, and baseball player in high school and played basketball in college. He married Barbara on January 11, 1952 during his final year in college. He then joined the US Army after college graduation and served during the Korean War. They lived at Ft. McClellen and in Huntsville, Alabama. He studied electronics, computer, and guided missile technology and then taught officers guided missile technology courses in Huntsville, AL. After Ray's service in the army, he was employed by Union Carbide as a chemist and manufacturing department head for 36 years in South Charleston, WV and Bound Brook, NJ. He received four patents at Carbide for chemical processing. He was involved for years as a coach and leader for his children's athletic teams and scouting groups as they grew up, and he had wonderful gardens and raised cattle at his home during his lifetime. He was an avid and very successful fisherman his whole life. He also attended Marshall University, WV State University, and the Alexander Hamilton Institute in Philadelphia studying business while raising his family. Ray was very instrumental during the beginnings of the Teays Valley Presbyterian Church in Scott Depot, WV in 1955. He and Barbara were charter members of the church, and Ray was the first superintendent of the church Sunday School and was the first clerk of session as an Elder in the original elected church elders class. He was honored and named Elder Emeritus of The Presbyterian Church USA in 2001. He and Barbara were the last survivors of the original adult members of the church. He sang in the church choir for about 55 years, taught Sunday school, and lead the first youth fellowship group at the church. Ray was a very fine man in all ways and will be fondly remembered and greatly missed by his family and many friends. Private funeral arrangements were made through Chapman Funeral Home in Teays Valley with a private burial at Valley View Memorial Park cemetery in Hurricane, WV.

George Raymond Stringer, 90, from Scott Depot, WV, passed away peacefully on September 12, 2021 with his family at his side. Ray was born on August 17, 1931 in Bloomingdale, Ohio. Survivors include his beloved wife and best friend... View Obituary & Service Information

The family of George Ray Stringer created this Life Tributes page to make it easy to share your memories.

Send flowers to the Stringer family.