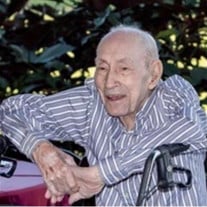 Harold E. Dawson SEPTEMBER 8, 1923 - DECEMBER 27, 2018 (AGE 95) Harold E. Dawson, 95, of Bartow, FL, passed away December 27, 2018. He was born in Widen, WV, to the late Meade and Lucy Jane (Hamrick) Dawson. He was preceded in death by his brothers: George, Custer, Donald, and Paul, and his sisters: Daisy, Pearle, and Doris. Known as "Pony" by his friends, he attended Widen High School and was very active in the community. He was an integral part of the development of the town. He helped to establish the Post Office, build the gymnasium and swimming pool, he had the honor of making a "dream come true" by starting the electric generator at the Recreation Center. He was a member of the Rotary Club and emceed the annual beauty pageants/talent shows. He also laid the bricks that still hold the street sign that points the way to Widen. Harold honorably served his country in the US Army from May 1943 until March 1946 as a Technician Third Grade in the 1474th Engineering Maintenance Company. His specialty was Construction Equipment Mechanic 319; Camouflage Technician; Quartermaster Supply; Sharpshooter Rifle; Sharpshooter Carbine. He was in line for the invasion at Normandy but his ship developed engine trouble and he followed at a later date. He trained as a sniper. He received the Victory Medal WWII; EAME Theater Ribbon with One Bronze Star; the American Theater Ribbon; Asiatic Pacific Theater Ribbon; Philippine Liberation Ribbon; and a Good Conduct Medal. He was just short a day or two from dropping the atomic bombs in Japan. Harold was a 32nd degree Master Mason and member of the Grand Lodge AF & AM of Florida, Kathleen Lodge #338 and the Masonic Low 12 Club, He was a member of the White Shrine and the American Legion, Post #3. He worked his way up in the phosphate industry and retired from Cargill, Ft. Meade in 1988 as a Plant Superintendent. He enjoyed travelling to West Virginia every summer and attending "Widen Day". He loved fishing, and collecting many fine objects. He was a trained gunsmith. Most of all he loved his family. Harold married the love of his life, (and is survived by) Verna Bird in 1962. They moved to Florida and raised four children, Debra, Kim, Larry (Nikki), and Tracy. He was blessed with eight grandchildren, Jason (Natalie), Kaylyn (Mike), Erica, Christopher, Steven, Ashlee, Samantha and KayDee, and two great-grandchildren, Addyson and Abbygail. He is survived by many nieces, nephews and extended family. A celebration of his life was held at Whidden McLean Funeral home in Bartow, FL on Jan 3, 2019 A memorial will be held at Cunningham Memorial Park, Upper Mausoleum Chapel, St. Albans, on Wednesday, January 9, 2019. Viewing will be from 12 noon until 1:00pm. Military honors by the James E. Marshall American Legion Post #187, Winfield will begin at 1:00 pm with service immediately following. You may share memories of Harold by visiting his tribute page at ChapmanFuneralHomes.com Bartlett-Chapman Funeral Home, family-owned and located at 409 Sixth Avenue, St. Albans is honored to serve the Dawson family.

The family of Harold E. Dawson created this Life Tributes page to make it easy to share your memories.

Send flowers to the Dawson family.