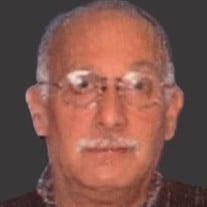 Harry Machado of Winfield passed at home Wednesday, May 26, 2021. His brave battle with diabetes and all the complications ended. He is survived by his second wife Rosalie and first wife Darlene Shores, mother of his sons Kenny Machado (Tracey) of Arizona, Keith Machado (Farrah) of Winfield; grandchildren, Lauren Michelle, Kristopher of Oklahoma, Delaney Rae and Grayson Machado of Winfield and furbaby, Tuesday. He was preceded in death by his parents, Nicholas Machado and Carmen Amador Machado Prieto, brother, Carlos; sisters, Leticia and Carmen of New York City. Surviving sisters, Florita Castrada of Florida, Alexandra Prieto of Puerto Rico, Brumhilda and brother, Peter Prieto of New York City. He served in the Army and USA-Stratcom Pacific USAR Control Group in Oahu, Hawaii during the Vietnam War. On his return to New York City, He worked at several banks and brokerage firms, tiring of the pace, he moved to Pennsylvania with his family where he worked as a wholesale food salesman, being transferred to Cincinnati, Ohio then to Charleston, West Virginia for Pantry Chef later Standard Foods later opening his own company. While in the Army, he was a boxer and played baseball. Harry had a passion for baseball. He had coached little league teams in Hurricane. He followed the New York Yankees since his teens. The family sincerely thanks his Home Health Staff and the extensive medical staff from the VA Hospital, Fresenius Kidney Center in Teays Valley and CAMC Teays Valley, they were a blessing to him. Funeral service will be held at 1:00pm Wednesday, June 2, 2021 at Chapman Funeral Home, Winfield. Burial with Military Honors will follow at Donel C. Kinnard Memorial State Veterans Cemetery, Dunbar. Visitation will be one hour prior to the service at the funeral home. To share memories of Harry you may visit his tribute page at ChapmanFuneralHomes.com Chapman Funeral Home, 12848 Winfield Road, Winfield is honored to serve Harry and his family.

Harry Machado of Winfield passed at home Wednesday, May 26, 2021. His brave battle with diabetes and all the complications ended. He is survived by his second wife Rosalie and first wife Darlene Shores, mother of his sons Kenny Machado (Tracey)... View Obituary & Service Information

The family of Harry Machado created this Life Tributes page to make it easy to share your memories.

Send flowers to the Machado family.