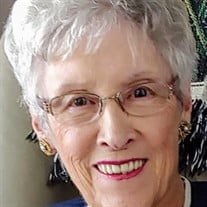 Hilda "Hitch" Mae Murnahan Cordial, 93, daughter of the late William "Roundy" and Lena Marie Murnahan, passed away peacefully under Hospice care on Thursday, July 1, following a steady decline in her health over the past several months. Hilda was predeceased by Lon, her loving husband of 52+ years, in 2001. Hilda and Lon met at Black's Roller Rink as teenagers and became sweethearts before Lon was deployed to Allied-occupied Germany in 1945. They wed after his military tour ended and started their family soon after. Roller skating was a favorite family pastime, with the five of them skating nearly every Friday night for many years. Hilda loved Elvis. She would load her three girls into the back of the station wagon to go to the drive-in theater to watch his latest film. She was a devoted wife, and mother, not only to her three girls, but to every child who entered her home, prompting the title "Best Mommy of our Youth," by one of Debbie's closest friends. She had a big heart and was a defender of any and all helpless, furry creatures. She enjoyed doing needle-work, especially embroidery, and leaves behind many beautiful, cherished pieces. She and Lon finally got the boy they always wanted in their grandson, Kyle, who was the apple of his Mamaw’s eye. She was “all in” for whatever he was “all in for,” and played with him for hours, trying to persuade him they should play “Let’s take a nap.” However, he was very persuasive with his irresistible appeal of “Let’s play Little People, Mamaw.” She had a wonderful attitude toward life's ups and downs, always summarizing most unpleasant situations with her signature statement - "it is what it is." Her family was everything to her, and she was everything to her family. Hilda had a meek, kind and gentle spirit. She will be dearly remembered and sorely missed by her children, Linda (Bill Moreland) Cordial, Jeanie (Jody) Thomas, and Debbie (Rick) McQuady; her grandson Kyle (Nelya) Thomas and her great-grandson, Colten. She was predeceased by two brothers, Frank and Bill Murnahan. She is survived by her siblings Margaret “Flootie” Lyons, Rita Shelton, Bob (Barb) Murnahan, Paul “Puck” Murnahan, Sue (Keith) Corbin, Brenda (Tom) Eaches and Mary Jean (Danny) Haas, as well as numerous extended family members. We find peace in knowing she is at rest in Heaven, reunited with her loved ones. Graveside services will be held at Golden Oaks Memorial Gardens on Wednesday, July 7, at 11 a.m. A post funeral reception will be held at the Delta Downtown Ashland Hotel Ballroom A immediately following the burial. Special thanks to Hospice for helping with her care. In lieu of flowers, donations in Hilda’s memory may be directed to Hubbard Hospice House, 1001 Curtis Price Way, Charleston, WV 25311.

The family of Hilda "Hitch" Mae Murnahan Cordial created this Life Tributes page to make it easy to share your memories.

Send flowers to the Cordial family.