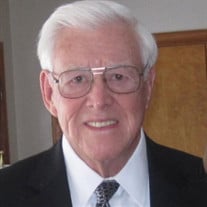 Jack Kenna Arnett passed away December 24, 2019. Jack was born May 24, 1927 in Winfield, WV to James Kenna Arnett and Mabel Stone Arnett. He graduated from Winfield High School in 1945 where he played on the football and basketball teams. After high school he joined the U.S. Navy and after completing his service he enrolled at Marshall College where he received a B.S. in Business Administration. He was a member of Sigma Phi Epsilon fraternity. While at Marshall, he met Phyllis Price who was in nurse’s school at St. Francis Hospital. They were married in 1950. After graduation from Marshall, Jack joined Kanawha Valley Advertising Co. in 1952 where he was later named Executive Vice President and General Manager and remained there for 44 years. He was very active in the Outdoor Advertising Association of WV and the Outdoor Advertising Association of America. He was one of the owners of Allegheny Poster Advertising Company of Terra Alta, WV. Jack and Phyllis traveled frequently and saw many parts of the country and the world. He was an avid golfer and a member of Sleepy Hollow Country Club. He was a 50 year member of Masonic Lodge 36 and professed his Christian faith as a member of Winfield United Methodist Church where he served on several committees. He is survived and missed by his wife, Phyllis Price Arnett; two daughters, Karen Jane Cox (Steve) and Mary Beth Myers (John); three grandsons, David Cox, Chris Cox (Tara), and Chad Proctor (Heather); and two great grandchildren, Adriana Cox and Jace Cox. A celebration of his life will be held at 2pm Saturday, December 28, 2019 at the Winfield United Methodist Church, 20 Radwin Drive, Winfield with Pastor Christopher Scott and Rev. Dr. Edward Grant officiating. Visitation will be held one hour before the service. You may also visit his tribute page at ChapmanFuneralHomes.com to share your memories of Jack with the family. In lieu of flowers, the family requests that donations be made to Hospice Care, 1606 Kanawha Blvd., West, Charleston, WV 25387 or to the Winfield United Methodist Church Building Fund, PO Box 391, Winfield, WV 25213. Chapman Funeral Home, family-owned and located at 12848 Winfield Road, Winfield is honored to serve the Arnett family.

Jack Kenna Arnett passed away December 24, 2019. Jack was born May 24, 1927 in Winfield, WV to James Kenna Arnett and Mabel Stone Arnett. He graduated from Winfield High School in 1945 where he played on the football and basketball teams.... View Obituary & Service Information

The family of Jack Kenna Arnett created this Life Tributes page to make it easy to share your memories.

Send flowers to the Arnett family.