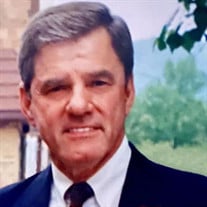 Jack William Glaspell, 74, of Hurricane, West Virginia, passed away peacefully after a long battle with Parkinson’s on March 13, 2022. Jack was born on March 19th, 1947 in Charleston, WV. He was a 1966 graduate of Charleston High School. Following high school graduation, he obtained a BA in Sociology from Morris Harvey College in 1970, where he was a member of Sigma Phi Epilson. Jack loved fashion and worked at Henry’s Men’s Shop while putting himself through college. He later moved to Dunbar, WV with his wife and lived there for 36 years. Jack was a letter carrier with USPS for 32 years. Following retirement, he worked part-time for Wilson Funeral Home and Kanawha County Board of Education as a custodian. Jack was an avid gardener and enjoyed the spring time the most. He took pride in being a Past Master at the Dunbar Lodge #159 A.F. & A.M, a former member of the Beni Kedem Shrine and an active member of the Charleston Southridge Pacesetter Lions Club. Jack was a very active member with the Dunbar Athletic Boosters for many years. His favorite past time was watching his son and daughter play sports throughout their youth. He was blessed to be able to do the same with his two oldest grandsons who were his pride and joy. Jack was a WVU season ticket holder for many years and loved attending the games with his family to watch the Mountaineers. He is preceded in death by his parents, James and Frances Glaspell, his son, John William Glaspell, his brother, Richard “Frog” Glaspell, his niece, Shelly Glaspell Near, his Mother and father-in-law, Archie and Betty Adkins, and his sister-in-law, Susie Adkins Hall. Jack is survived by his loving wife and caregiver, Phyllis, of 51 years, his daughter Stacy (Travis) Bradley, sister, Judy Sexton, brother, “Bo” (Jane) Glaspell, his grandsons: Ty Turner, Blake Bradley, Davian Glaspell, Darian Glaspell and granddaughter Briah Herold, nieces: Kim Spurlock, Janese (Kevin) Haynes, Leigh Ann Sexton, Christina (Phillip) Hatley, Tish Glaspell, and Kasie (Mathew) Grose; nephews; Harry (Amy) Glaspell, and AJ (Summer) Hall and a number of great nieces and nephews as well as many friends who mourn his passing. The family would like to thank Pastor “Sonny” Williams, his wife Patty, and daughter Bethany Carr, all of Teays Valley Church of the Nazarene, for their continued love and support to the family over the past year in a half. Visitation will be held in Jack’s memory on Thursday, March 17th 2022 from 5-7:00 p.m. at Chapman Funeral Home in Teays Valley, WV. A Memorial Service will follow at 7:00 p.m., with Rev. Charles V. Williams officiating. In lieu of flowers, please consider donating to the Teays Valley Church of the Nazarene Building Fund or TVCN Connection Kids at P.O. Box 1297, Hurricane WV 25526, in honor of Jack. Chapman Funeral Home, family owned and located at 3941 Teays Valley Road, Hurricane WV 25526, is honored to serve the Glaspell family.

Jack William Glaspell, 74, of Hurricane, West Virginia, passed away peacefully after a long battle with Parkinson&#8217;s on March 13, 2022. Jack was born on March 19th, 1947 in Charleston, WV. He was a 1966 graduate of Charleston High School.... View Obituary & Service Information

The family of Jack William Glaspell created this Life Tributes page to make it easy to share your memories.

Send flowers to the Glaspell family.