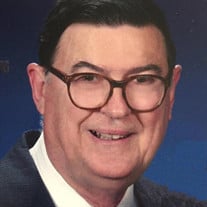 James Richard Aliff went home to be with the Lord Wednesday, September 23rd at home after a short illness with family at his side. He was born in Fayetteville, WV on April 10, 1936, the first of two children, to Jeter Richard “JR” Aliff and Hallie Irene Maynor. His earliest years were in Fayetteville during his father’s term as Fayette County Sheriff. The family moved to St. Albans in 1941 when his father became Clerk of the House of Delegates. James married Janice Ellen Bowden on September 6, 1957 celebrating over 63 years of marriage. James “Jim” graduated from St. Albans High School in 1954 and from MIT in 1958 with a degree in Electrical Engineering. He hired in to Union Carbide Corporation on October 10, 1958 where he worked until his retirement from Union Carbide (Rhône Poulenc). He continued to work through CDI Engineering until the age of 82. Jim was well respected and loved working for Carbide where he made many friends. He especially loved going out for lunch with his colleagues. Jim was exceptionally talented at many hobbies. He loved “working” on his farm where he enjoyed driving his John Deere tractor, gardening, and doing many other projects. Jim was most recently known as “Pop pop” by his two granddaughters who thought the world of him. He is preceded in death by his parents, one child, David Lee; several aunts and uncles, including Lelia Anne Aliff and Mildred Clower who raised him after the passing of his mother. He is survived by his wife, Janice; daughter Amy (Jarrod) of Scott Depot; granddaughters, Ashlynn and Alexis; sister, Celia Janis Aliff of Springfield, VA and loved pets Sadie and Blackie Piper. A memorial service will be held at 2pm Sunday, September 27, 2020 in the Upper Chapel at Cunningham Memorial Park, St. Albans officiated by Dr. John D. Smith. Friends may visit one hour prior to the service at the Upper Chapel. Masks are required and social distancing guidelines will be observed. You may visit his tribute page at ChapmanFuneralHomes.com to share memories and offer condolences with the family. Chapman Funeral Home, family-owned and located at 3941 Teays Valley Road, Hurricane is honored to serve the Aliff family.

James Richard Aliff went home to be with the Lord Wednesday, September 23rd at home after a short illness with family at his side. He was born in Fayetteville, WV on April 10, 1936, the first of two children, to Jeter Richard &#8220;JR&#8221;... View Obituary & Service Information

The family of James Richard Aliff created this Life Tributes page to make it easy to share your memories.

James Richard Aliff went home to be with the Lord Wednesday,...

Send flowers to the Aliff family.