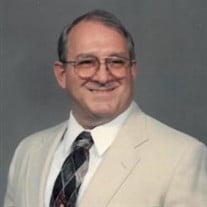 James Gilmore Fletcher Rinick II passed away in his Red House residence on October 22nd, 2021 after suffering several years of health complications. He was 79 years old and surrounded by his family in his final hours. He is survived by his wife, Patricia, his sisters, Sondra Cardona, Pam Fagan, and Susan Hoving, his three children and eight grandchildren: Leigh Johns and David of Winfield, their children: Katie, Eric, Vladik, and Krissy; Jimmy Rinick and Nancy of Cross Lanes, their daughter, Emily; and Daniel Rinick and Crissy of Buffalo, WV, their children: Anna Rinick Whyel (married to Cory Whyel; of Morgantown), Johnny, and Hope Rinick; and his one great grand-child, Cayde Whyel. He was born to J. Gilmore Rinick and Ethel Mosholder Rinick on February 2nd, 1942. He was their only son and the oldest sibling of four sisters. He lived in the Putnam/Kanawha County areas all his life. He graduated from Dunbar High School in 1959, where he played football for one year and trumpet in band. He served in the US Air Force from 1961 to 1967 as a military base police officer at the Langley Air Force Base in Virginia. After an honorable discharge, he and Patricia Ann Pitchford met at the Shoney’s drive in on Kanawha Boulevard in 1966 and dated for six months. They were married March 17th, 1967 and were happily married for 54 years. He worked at the Bayer chemical plant in Institute until his retirement in 1999. After which, he spent more quality time with his loved ones and growing extended family. He was a very blessed and proud family man who was able to see all his children marry, his grandchildren grow up, get adopted, graduate school, participate in sports, attend dances and recitals, achieve their personal interests and goals, and even one of his granddaughters get married, have a child, and another one become engaged before his passing. He also enjoyed classic cars, watching westerns and cartoons, and working on word searches. He was a weightlifter in his prime, starting a local weightlifting group called the Iron Workers at one point in time. He was a devout Christian who attended Winfield Baptist Church most of his life where he sang in choir, led the congregation in song during services, participated in a ministry to a local nursing home, as well as to Camp Cowen. He was involved in fellowship events as much as he was able as well. Visitation will be held on Thursday, October 28, 2021 from 10am to 11am at Winfield Baptist Church. Funeral service will begin promptly at 11am with Pastor Andrew Gordon and Pastor Mark Toole officiating. Burial will immediately follow at Tyler Mt. Memory Gardens. You may also visit his tribute page at ChapmanFuneralHomes.com to share memories and offer condolences to the family. Chapman Funeral Home, 1288 Winfield Road, Winfield WV is honored to assist the Rinick family.

James Gilmore Fletcher Rinick II passed away in his Red House residence on October 22nd, 2021 after suffering several years of health complications. He was 79 years old and surrounded by his family in his final hours. He is survived by his wife,... View Obituary & Service Information

The family of James Gilmore Fletcher Rinick II created this Life Tributes page to make it easy to share your memories.

Send flowers to the Rinick family.