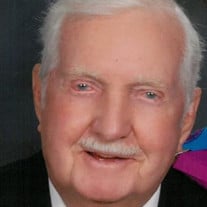 James C. Samples, 89, of Hurricane passed away on Thursday, December 12, 2019. Jay was born on July 5, 1930 in Cleveland, Ohio, son of Harley and Etta Samples. He is survived by his wife, Marilyn, of 70 years and also his children, Stephen (Patsy), Kathleen (Edward), and Elizabeth. He has 11 grandchildren and 15 great grandchildren. He was preceded in death by his parents and his brother, Clifton (Knute) Samples. After leaving Ohio, his family lived several places in West Virginia, before settling in St. Albans. He attended St. Albans High School, where he played football on offense and defense during their undefeated season in 1948. He also played baseball and was proud that he was All-State in '48, and pitched in the 1st North-South All-Star game. After graduation, he joined the International Brotherhood of Electrical Workers LU466 and was a lifelong member for over 70 years. He worked for various contractors in Florida and West Virginia, until co-founding Progressive Electric in Charleston in 1978. During this time, he served as President of the Kanawha Valley Building & Trades Association. After retiring in 1992, Jay and Marilyn moved to The Villages at Lady Lake, Florida, where they lived for almost 20 years. He was a stranger to no one. He always said "to have friends, you had to be a friend". All the stories, jokes, and tales he told in The Villages, soon became known as "Jayisms". At the age of 78, Jay returned to the Charleston area for nine weeks to work at the John E. Amos plant with his son, and grandson, who are also electricians (3 generations). During his retirement in Florida, Jay was President of the West Virginia Club and for 19 years delivered for Meals on Wheels. He was involved with the Chapel of Christian Faith where he sang in the choir and was a Deacon. Jay joined the golf league of The Villages where his golfing buddies called him Mr. Sandy because he was a one of the greatest out of the sand. His golf handicap was 6. They returned back to West Virginia in 2012. Upon their return from Florida, they joined Mt. Vernon Baptist Church where he served as Deacon and started the Men's Fellowship Saturday morning breakfast meetings. Wherever they lived, Jay was always involved. He was boy scout leader, 1st male PTA President of Montclair Elementary in Pensacola, Florida, involved in the Nitro Junior High School band boosters, he was a member of the Washington Masonic Lodge # 58 AF & AM, St. Albans, and the St. Albans Moose Lodge. Funeral service will be held at 12 Noon Monday, December 16, 2019 at Chapman Funeral Home, Hurricane with Rev. Dr. Lawrence Hoptry officiating. Entombment will follow at Cunningham Memorial Park, St. Albans. Visitation will be held from 5-7pm Sunday at the funeral home. You may also visit his tribute page at ChapmanFuneralHomes.com to share your memories of Jay with the family. The family would like to thank all of the staff at the Hubbard Hospice House in Charleston, WV for their kindness and support. Chapman Funeral Home, family-owned and located at 3941 Teays Valley Road, Hurricane is honored to serve the Samples family.

James C. Samples, 89, of Hurricane passed away on Thursday, December 12, 2019. Jay was born on July 5, 1930 in Cleveland, Ohio, son of Harley and Etta Samples. He is survived by his wife, Marilyn, of 70 years and also his children, Stephen... View Obituary & Service Information

The family of James C. Samples created this Life Tributes page to make it easy to share your memories.

James C. Samples, 89, of Hurricane passed away on Thursday, December...

Send flowers to the Samples family.