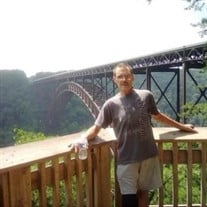 John Matthew Creech, 57, of Kenova, WV, departed the world on Thursday, Feb. 17, 2022, at his Walnut Street home. He was born Aug. 11, 1964, in California, a son of the late Thomas Creech and his mother, Rose, who lives in Kentucky. He was preceded in death by his father and two brothers, Joe and Terry. He is survived by his mother; brother: Tom; daughters and little buddies: Jacey (Michael), Emily (Justin), Courtney (Cory), Molly and Sarah; as well as, three grandchildren: Elizabeth, Calvin and Cole; nieces: Rosie and Becky; and special friends: Rose, Cleo, and Sam, and in-laws: Kathie and Larry Sheets. John was most excited to meet his newest buddy and fourth grandchild, Truxton later this month. He cared deeply for his loyal animals: Angel, Chicken and Peanut, who stood by his side until joining him in death. John's roots are in Raceland, Kentucky, but he spent his most recent decades in the West Huntington and Kenova communities. He loved his community and his community loved him. He worked a career as an Auto Tech at Tireland and was proud of his service as a member of the US Army’s 11th Armored Cavalry “Blackhorse” Regiment, where he served in armed combat as a tank operator in Germany. His recent re-connection with his regiment gave him joy in his final years. John was a dedicated fan to NASCAR, the Cowboys football team and loved classic television shows like Gunsmoke and Perry Mason. He woke everyday before the sun to get a quick workout in. Despite losing a leg years ago, John could often be seen walking with his animals through Kenova and along the Ohio River banks, a place which gave him peace. A true Appalachian, John had little money, but enough kindness, bad jokes and stories to brighten anyone’s day. John’s imagination flourished, and because of that, his children and grandchildren thrived. He could turn a simple task of picking up rocks into the pinnacle of one’s life. He deserved the world, but instead gave it to others. A private Celebration of Life will be held for family and friends at a later date at the Creech family cemetery along Happy Ridge in Greenup County, Kentucky, and the Ohio River bank in Kenova, where John will be taken for one final walk by his little buddies. In lieu of flowers, please consider making donations to the Huntington Cabell Wayne Animal Control Shelter at 1901 James River Road, Huntington, WV or the Disabled American Veterans, a charity which provides transportation support for veterans in need.

John Matthew Creech, 57, of Kenova, WV, departed the world on Thursday, Feb. 17, 2022, at his Walnut Street home. He was born Aug. 11, 1964, in California, a son of the late Thomas Creech and his mother, Rose, who lives in Kentucky. He was... View Obituary & Service Information

The family of John Matthew Creech created this Life Tributes page to make it easy to share your memories.

John Matthew Creech, 57, of Kenova, WV, departed the world on...

Send flowers to the Creech family.