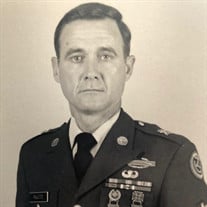 Joseph William McLeod, 73 of Hurricane passed away Saturday April 4, 2020. Joseph was born June 29, 1946 in Kirkwood, Missouri. He earned his Associate’s Degree from Meramec College, Missouri. Joseph served his country in the United States Marine Corps as an infantryman during Vietnam. As an infantryman, he was awarded the Cross of Gallantry for his acts of valor. He re-enlisted in the United States Army, where he went through Special Forces training and became a Green Beret. In addition, he went through the Army Airborne School and “earned his wings”. Following his service to his country, Joseph worked at Chrysler for 20 years. He was preceded in death by his loving wife Janice Lynette McLeod and son-in-law, Jon Michael Pritt. He is survived by his children; Rob (Sara), Katy (Chris), Elisha (Thu) Abby, Joe (Chelsie), John (Emily) and the grandchildren he loved so much; Colin, Devon, Cailey, Chole, Sophia, Neyland, Aiden, and Liam. A Celebration of his Life with Military Honors will be held once the COVID-19 pandemic subsides. In lieu of flowers, please donate to the VA Volunteer Services. Chapman Funeral Home and Crematory, Hurricane is honored to serve the McLeod family. “And when he goes to Heaven, to St. Peter he will tell: Another marine reporting, Sir; I’ve served my time in hell.”

The family of Joseph William McLeod created this Life Tributes page to make it easy to share your memories.

Send flowers to the McLeod family.