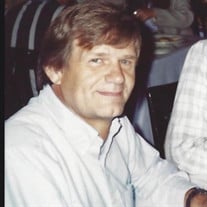 Lester Hugh Boden, Jr., age 76, went to be with the Lord on March 2nd, 2021, at his daughter’s home, surrounded by loved ones. Les was faced with numerous hurdles throughout a major surgery recovery; yet, he remained strong and determined to regain his independence. Les was born in Cumberland, Maryland, on August 18th, 1944. He fondly spoke of his childhood growing up in Cumberland. He went to Allegany High School. He was a “Camper” for life! He even enjoyed watching his alma mater’s football games and stories on the history of Cumberland until his final days. He really enjoyed attending his high school reunions. He was a proud Eagle Scout. Following his graduation he enlisted in the Air Force, where he was stationed in Japan, and Laredo, Texas. Les moved from Maryland to Florida where he met his love, Martha Boden (Payne), at Matheson Hammock Park in Coral Gables, Florida. He was a loving husband to Martha and they were married for fifty years. Les was a Computer Engineer for many years and loved all things high tech, especially Tesla’s and green energy. He was intrigued with NASA and the exploration of space, because of his father’s career at The Cape. Martha and Les lived in Miami for over thirty years. Once they retired, they decided to build on the lot they purchased twenty years earlier in Golden Hills Country Club, in Ocala, Florida. They spent a lot of time together gardening, landscaping, watching the news and of course, lots of the Weather Channel, since Les was a fanatic about the weather. They spent a lot of time traveling to North Carolina to spend precious time with their daughter, Natalie and granddaughter Ashton. They eventually built a home in the mountains of North Carolina to spend more quality time with family and the family dog, Lila Grace. He spent the last three years being a devoted, incredible caregiver to Martha while she endured Alzheimer’s. If anyone knew Les, even the slightest bit, they knew he LOVED model trains. He enjoyed working on his train layouts for countless hours, making them come to life. He enjoyed sharing this passion with his buddies from his train club, The Ocala Three Railers. He found so much joy in making his layouts unique and full of holiday spirit to share with his friends and family. He especially loved showing off specialty trains to his granddaughter, Ashton. They developed quite a bond making funny signs and displays while listening to Conway Twitty and Brenda Lee. He was full of spirit about holidays, particularly holidays that represent our amazing country. He would set up incredible Christmas displays with Martha. He spent days decorating with Martha to make sure it was memorable for all. He was a loving father to Natalie and amazing Pop Pop to Ashton. Les was preceded in death by his wife, Martha Boden; parents, Lester H. Boden Sr. and Margaret Jane Boden (Dashiell), siblings, Perry Boden and Keith Boden. He is survived by his sister, Linda Boden, of Denver, Colorado; and daughter, Natalie Dilling (Jason Dilling) of Monroe, North Carolina and granddaughter, Ashton Williams and grandsons, Addison Dilling, Aubrey Dilling and Anderson Dilling. A service will be held at Chapman Funeral Home in Winfield, WV on Saturday, March 6, 2021 at 11:00 am, followed by a brief graveside ceremony at the Payne family cemetery located on Rocky Step Road in Winfield, WV. Visitation will be 30 minutes prior to the service at the funeral home. Chapman Funeral Home, family-owned and located at 12848 Winfield Road, Winfield is honored to serve the Boden/Payne family.

Lester Hugh Boden, Jr., age 76, went to be with the Lord on March 2nd, 2021, at his daughter&#8217;s home, surrounded by loved ones. Les was faced with numerous hurdles throughout a major surgery recovery; yet, he remained strong and determined... View Obituary & Service Information

The family of Lester Hugh Boden Jr. created this Life Tributes page to make it easy to share your memories.

Send flowers to the Boden family.