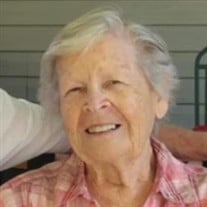 Louise (Workman) Gunnoe, 94, of Winfield, WV, passed away peacefully at her home on Wednesday, September 22, 2021. She was born in Pike County, KY, to the late Clyde Workman and Kate Runyon on April 22nd, 1927. She was a graduate of Sherman High School, Seth, WV. Her family includes; sons, John S. Gunnoe, (Linda) of Lynchburg, Va., Robert L. Gunnoe Jr., of Elizabeth, WV., and Grant K. Gunnoe, (Robin) of Winfield, WV; daughter in law, Brooke Gunnoe, of Clover, South Carolina. Grand-children; Bryan Gunnoe, Jeremy Gunnoe (Ronnie Humbertson), Joel Gunnoe, April Murray (Ernest), Ashley Gunnoe, Grant Gunnoe Jr. (Staci), and Andrew Gunnoe (Erica). Great-grand-children Hunter Martin, Dakota Childers, Maryn Gunnoe and Alec Gunnoe. Louise is survived by four siblings; Emogene Epling, Edith Johnson, and Clyde Workman Jr. of West Virginia, and Mary Heflin of Virginia. In addition to her parents Louise was also preceded in death by her husband, Robert L. Gunnoe; son, Barry L. Gunnoe; grand-daughter, Aimee Gunnoe; daughter in law, Karen Gunnoe; brother, Charles Workman; sisters, June Meadows and Kay Gordon. Louise and her husband Bob, along with their four sons, moved to Winfield from Charleston in 1957. They loved the community, the people, the school system and just thought it was the perfect place to raise their family. Louise worked at the Putnam County Court House for approximately 45 years, first as the Deputy Circuit Clerk and then as the Magistrate Court Clerk, retiring in 2010 at the age of 84. She loved to work and loved working with all of the people involved in the Judiciary System. If she could have, she would have been working up until the very end. Louise had several lifelong friends, including the late Judge Clarence L. Watt and her dear friend Leotha Boles. Louise was an avid WVU fan and enjoyed watching mountaineer football and basketball and rarely missed watching a game. She was a 50 year member of the Nitro Chapter of the Order of the Eastern Star. Louise was kind and caring with a wonderful sense of humor. She was loved and respected by many and will be greatly missed. Graveside services will be held at 1pm on Saturday, September 25, 2021 at Cunningham Memorial Park Mausoleum in St. Albans, WV with visitation beginning at 12:30pm. Chaplain Mike Jarrett will be officiating. Flowers are welcome or donations to Kanawha Hospice Care: 1606 Kanawha Blvd W. Charleston, WV 25387 Anyone wishing to leave an online memory may do so by visiting her tribute page at: www.chapmanfuneralhomes.com. Chapman Funeral Home and Crematory, family owned and located at 3941 Teays Valley Road, Hurricane WV 25526 is honored to handle the Gunnoe family’s arrangements.

Louise (Workman) Gunnoe, 94, of Winfield, WV, passed away peacefully at her home on Wednesday, September 22, 2021. She was born in Pike County, KY, to the late Clyde Workman and Kate Runyon on April 22nd, 1927. She was a graduate of Sherman... View Obituary & Service Information

The family of Louise W. Gunnoe created this Life Tributes page to make it easy to share your memories.

Send flowers to the Gunnoe family.