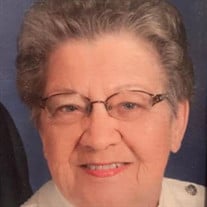 Marilyn Wallace Samples, 88, of Hurricane passed away on Wednesday, March 4, 2020. Marilyn was born May 9, 1931 in the Spring Hill area of South Charleston. She was a daughter of the late Joseph Emmett and Grace A. Bowles Wallace. She was also preceded in death by her husband, James C. “Jay” Samples. Before his death in December 2019, they celebrated 70 years of marriage on June 9, 2019. Two brothers, Jack and James Wallace also preceded her in death. She is survived by her children, Stephen (Patsy), Kathleen (Edward), and Elizabeth; twin sister, Carolyn Haney; sister, Laura McKinnon; brother, Joseph Wallace (Elizabeth). She has 11 grandchildren and 15 great grandchildren. She attended South Charleston High School and was a member of the sewing club. She and Jay were married shortly after high school, and began raising a family. Moving to Pensacola, Florida in 1958, she worked as a secretary at the local Board of Education and was instrumental in supporting her children with their activities. They moved back to West Virginia in the Summer of 1967, where she worked as a secretary at the West Virginia State Police Academy for many years. In 1992, Jay and Marilyn returned to Florida living in The Villages at Lady Lake, Florida, where they remained for almost 20 years. While there, Marilyn was a member of the Women’s Golf League and the West Virginia Club. Their final return to West Virginia occurred in 2012 to be near family and friends. Funeral service will be held at 2pm Sunday, March 8, 2020 at Chapman Funeral Home, Hurricane with Rev. Dr. Lawrence Hoptry officiating. Entombment will follow at Cunningham Memorial Park, St. Albans. Visitation will be held one hour prior to the service Sunday at the funeral home. You may also visit her tribute page at ChapmanFuneralHomes.com to share your memories of Marilyn with the family. The family would like to thank all of the staff at the Hospice Care for their kindness and support. Chapman Funeral Home, family-owned and located at 3941 Teays Valley Road, Hurricane is honored to serve the Samples family.

Marilyn Wallace Samples, 88, of Hurricane passed away on Wednesday, March 4, 2020. Marilyn was born May 9, 1931 in the Spring Hill area of South Charleston. She was a daughter of the late Joseph Emmett and Grace A. Bowles Wallace. She was... View Obituary & Service Information

The family of Marilyn Wallace Samples created this Life Tributes page to make it easy to share your memories.

Marilyn Wallace Samples, 88, of Hurricane passed away on Wednesday,...

Send flowers to the Samples family.