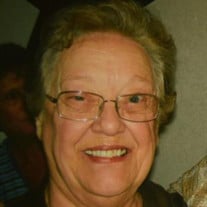 Merlyn Marie Johnston, 93, of Winfield passed away June 13, 2021. Born October 11, 1927 in Staunton, Virginia, Merlyn was a daughter of the late William Graham Snyder and Marion Alice Webb Snyder. As a young girl, Merlyn enjoyed playing and competing on the girls basketball team and singing in the Glee Club. Her love of music grew, when her beloved grandfather gave her piano lessons. She had talent for playing the piano and playing music by ear. She often would write down lyrics of songs she heard and liked so she could remember later and play for her family. While living at home with her parents, during the second world war, Merlyn’s father, a World War I veteran and her mother, a nurse gave back to the community and their country by opening their home to rehabilitating soldiers. Merlyn prepared many home-cooked meals for the soldiers. This is where she met her husband to be, William Paul Johnston. They dated while he went through multiple surgeries and rehabilitation. After they married, the couple moved to Morgantown and with her loving support he ran a dairy farm and went to school under the GI bill. Once William graduated, the family then moved to Winfield, where they raised five wonderful children. Merlyn was a natural caregiver and exceptional mother. Caring for her family always made her the happiest. She so enjoyed having family and friends around her, laughing, telling stories, singing around the piano and just being together. Left to cherish her memory are her children: William Michael Johnston, Carol Marie Sponaugle (Kelley), Jeffrey Paul Johnston (Cheryl, deceased), Timothy Scott Johnston (Angie), Brian Allen Johnston (Sherry), eight grandchildren and 11 great-grandchildren. A celebration of her life will be held at 11:00am Thursday June 17, 2021 at Chapman Funeral Home, Winfield with Chaplain Pete Thompson officiating. Entombment will follow at Valley View Memorial Park, Hurricane. Visitation will be 30 minutes prior to the service at the funeral home. Merlyn had one special friend that stayed in contact over the years and they shared conversations of their blessings with laughter and tears as well. Special thanks to Jean. God bless you. Now she is with her family in heaven and we’re sure she is happy as can be in Jesus loving arms. When the perishable puts on the imperishable, and the mortal puts on immortality then shall come to pass the saying that is written: “Death is swallowed up in victory.” O death, where is your victory? O death, where is your sting?” I Corinthians 15:54-56 You may share memories of Merlyn by visiting her tribute page at ChapmanFuneralHomes.com Chapman Funeral Home, 12848 Winfield Road, Winfield is honored to serve the Johnston family.

The family of Merlyn Marie Johnston created this Life Tributes page to make it easy to share your memories.

Send flowers to the Johnston family.