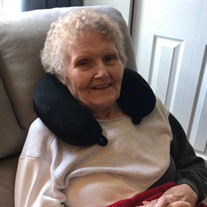 Mildred Ada (Sayre) Parsons, 86 of Dunbar, WV passed away peacefully May 26, 2021 at Emogene Dolin Jones Hospice House of Huntington. Born February 10, 1935 in Mason County, WV, she was the daughter of the late Perry Valloe Sayre and Hazel Bennett Sayre. In addition to her parents, she was preceded in death by her husband, Howard F. Parsons; siblings, Robert Earl Sayre, Roy Wayne Sayre, Russell Lee Sayre, Clara Louise Wandling, Norma Lucille Smith, Betty Lou Lynch and best friend and partner in crime, Pat Vance. Anyone that knew Mildred, knew that she was a compassionate, giving woman that always put the needs of others first. Her passion in life was cooking, and she loved to feed people. It was rare for anyone to leave her house without having a piece of cake, pie or something to eat. Her greatest joy was her only granddaughter, Kristen, who from an early age called her “Apple”. She was so proud of Kristen’s accomplishments and would share them with anyone who would listen. In her early adulthood she worked at Owen-Illinois in Kanawha City. Later she was a cook for the Kanawha County School System. She also worked with her husband at Dunbar Bowling Center, making the best food for many generations of Junior High students and a multitude of hungry bowlers. She later worked at the West Virginia Rehabilitation Center in Institute, WV, where she worked as a cook and later as a House Parent when she retired. She was very proud to have had the privilege to cook for Jay Rockefeller’s gubernatorial inauguration. Left to cherish her memories are son Howard F. Parsons Jr. (Frank) and his wife Linda Lou Parsons of Ironton, OH; daughter, Donna J. Cottrill and her husband Dennis R. Cottrill of Hurricane, WV; her granddaughter, Kristen Nichole Cottrill of Morgantown, WV; her grandson, Michael D. Sims of Ashland, KY and her sister, Stella Doughty of Dunbar, WV and a host of nieces and nephews. In honor of her wishes, she will be cremated and at a later date her cremains will be interred at Tyler Mountain Memory Gardens with no service to be held. In lieu of flowers, the family requests donations to be made to Hospice of Huntington-Emogene Dolin Jones Hospice House. The family would like to thank the staff of the Emogene Dolin Jones Hospice House for the compassionate care given in her final days and the staffs of Teays Valley Assisted Living and Magnolia Assisted Living for the care and love they gave to their mother. You may share memories of Mildred Ann Parsons by visiting her tribute page at ChapmanFuneralHomes.com Chapman Funeral Home and Crematory, Hurricane is honored to serve Mrs. Parsons and her family.

The family of Mildred Ada Parsons created this Life Tributes page to make it easy to share your memories.

Send flowers to the Parsons family.