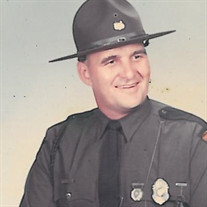 Millard P. “MP” “Sonny” Cook, 84, of St. Albans went home to be with the Lord on Friday, January 25, 2019 at CAMC Memorial Division, Charleston. He was born in Nitro to the late George Rosco and Macil Jeffies Cook. He was also preceded in death by 5 sisters, Maxine, Doris, Carol, Jean “Lois” and Patty and 2 brothers, George and Donald “Duck” Cook. MP was a retired Corporal from the West Virginia State Police with 25 years of service. After his retirement from the State Police, he went to work with the West Virginia Tax Department as an investigator. Sonny was a Marine veteran, having served during the Korean War. He was also a member of the West Virginia Air National Guard, 130th MAPS, a licensed pilot and a recipient of the Silver Beaver Award from the Boy Scouts of America. He was a graduate from Nitro High School, class of 1952, a graduate from West Virginia State College, and volunteered as an oil painting instructor at the Nitro Senior Center for over 20 years. He was a member of the Washington Masonic Lodge # 58 A.F & A.M., St. Albans. He loved to read, Mountaineer Football, painting and his cat Ruby. He was a Good Man. Surviving is his wife of 61 years, Rosemary; daughters, Myra Treadway and Jill (Eugene) Aliff; son, Phil Cook; brother, Richard “Dick” Cook. Also surviving are his 4 grandchildren, Eric Treadway, Kent Treadway, Paige Harris and Hunter Aliff and 3 great grandchildren, Hailey Treadway, Lucas Stone and Chase Harris. Funeral service will be held at 1:00 pm, Wednesday, January 30, 2019 at Bartlett-Chapman Funeral Home, St. Albans with Pastor Claudia Fizer officiating. Burial will be in Donel C. Kinnard Memorial State Veterans Cemetery, Dunbar with Military Honors and Masonic Rites. Friends may call from 11 to 1:00 pm prior to the funeral service at the funeral home. In lieu of flowers the family suggests donations to the Charity of your choice. You may visit Sonny’s tribute page at chapmanfuneralhomes.com to share memories or condolences with the family. Bartlett-Chapman Funeral Home, family owned and located at 409 Sixth Ave., St. Albans is honored to serve the Cook family.

The family of Millard P. "MP" "Sonny" Cook created this Life Tributes page to make it easy to share your memories.

Send flowers to the Cook family.