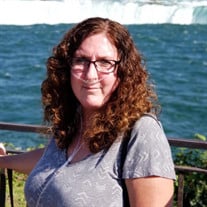 Neda Lynn Swiger, 53, of Eleanor, WV passed away on Saturday, January 15, 2022, surrounded by family at St. Mary's Hospital in Huntington, WV. As some of you know, she fought a courageous battle with many major health issues over the years and never lost her "never give up, Never surrender" attitude. Neda was born on December 22, 1968, to Delbert and Nancy Pitchford in Charleston, WV. She grew up in Poca and then was a long time resident of Eleanor, WV. After graduating from Buffalo High School in 1987 she started dating her soul mate Doug Swiger and they were married on October 15, 1988 and began a long and happy marriage together that was at 33 years and counting. Just before they were married, Doug joined the Air Force and they got orders to be stationed at Clark AB in the Republic of the Philippines for almost 3 years until the volcanic eruption of Mt. Pinatubo and then the last 9 months in San Bernardino, California, which is how she got her love of traveling that lasted a lifetime. Once he separated from the Air Force they moved back home and immediately started a family and had Haley and Logan. Neda poured everything that she had into being a wonderful, caring and loving mother that anyone would be fortunate to be able to call mom. She was at all of the school functions from parties, sporting events, band competitions field trips and everything in between. She knew no boundaries to helping and doting on her children. The only thing that came close to her love for her family was her love for her fur babies. Throughout the years she had many different pets and the animals usually outnumbered the people in the household which filled her with joy. Always ready to help a shelter animal or stray that would show up at the house, once an animal crossed the threshold into her house it knew unconditional love for them just as they returned to her. Anyone that knew her also knows that she had an adventurous side and absolutely loved to travel. She wasn't the person that wanted to do the same thing every year but instead find a new adventure and see something new and exciting. Their travels took them to many of the popular travel destinations such as New York City, Washington DC, Niagara Falls, Mackinac Island, Key West, Las Vegas, the Grand Canyon and cruises to the Caribbean to name a few. The last year was filled with new areas that included an HGTV tour of the Southern United States and to the New England area to make lasting memories which is what she saw as important in life. She is survived by her husband Doug, her children Mrs. Haley and Zachary Vannatter, Logan Swiger, her parents Delbert and Nancy Pitchford, siblings Melody Mendenhall and Angie Hatfield and of course her fur babies Apollo, Jade, Harley, Milo and Mittens. Neda did not want to have any services so we will just have a small family gathering at a later date. In lieu of flowers, the family would like to suggest a donation to the Putnam County Animal Shelter, 12908 Charleston Road, Red House WV 25168. Chapman Funeral Home, 3941 Teays Valley Road, Hurricane WV 25526 is honored to assist the Swiger family again.

Neda Lynn Swiger, 53, of Eleanor, WV passed away on Saturday, January 15, 2022, surrounded by family at St. Mary's Hospital in Huntington, WV. As some of you know, she fought a courageous battle with many major health issues over the years... View Obituary & Service Information

The family of Neda Lynn Swiger created this Life Tributes page to make it easy to share your memories.

Neda Lynn Swiger, 53, of Eleanor, WV passed away on Saturday,...

Send flowers to the Swiger family.