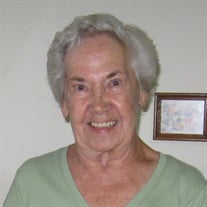 Patricia Carte Shinn, 94, daughter of late Ernest Owen Cart and Scerelda Selbe Cart, departed her Earthly bonds on December 17, 2018. Pat grew up on Glenwood Avenue, Charleston, one block from Old Luna Park, graduating from Stonewall Jackson HS in 1942. She is an alumnus of Trevecca Nazarene and Asbury Colleges, now Universities, with a B.A. in Education. Pat started her career at Logan Junior High School and then traveled to Costa Rica where she taught for two years before returning to West Virginia. She married O Ray Shinn while teaching at Sissonville Jr. High. In 1955 Pat and Ray moved to Scott Depot and she began teaching English at Nitro High School until November 1971. While there, she loved interacting with “her kids”, teaching them to think and create, and has always been proud of their personal and professional achievements. She then joined Ray in Puerto Rico, where he was on assignment as an inspector for Union Carbide and taught at the Caribbean School. Ray and Pat lived for 11 years in Piscataway, New Jersey, Antwerp, Belgium and Dickinson, TX while with Union Carbide before returning to Scott Depot. Those assignments allowed them to travel the Caribbean and Europe, into Russia and the Scandinavian countries. During her tenure at Nitro High School, she served turns as Head of the English Department and as President of Kanawha County English Teachers Association. After leaving she funded the Nitro High School “Pillars of Character Scholarship Award” for several years. Having served as President (1987-1988), she also served as Secretary (2000-2001) of Putnam County Republican Women’s Club. She was a past member of Pilot Club of Charleston Longtime member of the Teays Valley Club, the Putnam County branch, of the Carbide Old-timers serving on their program and food committees. As a member of Sleepy Hollow Golf Course since the early 60’s she enjoyed golf, dining, and social interaction. She was a charter member of The Golden Oldies, a small group of special friends that have enjoyed each other’s company for years and also in smaller group of friends that met regularly before her illness. As a genteel southern lady, Pat never met a stranger, always greeting folks with a smile and kindness, often making new friends, regardless of the location or country. Two of her most treasured friends, Vernon Young and Iva Danner, have spoken on the phone daily for years. Having lost a special student to the Vietnam War, she made it her mission to approach anyone in uniform, asking,” Can I give you a hug and where have you served?”, letting them know how much she appreciated their service. Surviving daughter, Patti Rae Shinn of Hurricane, step-daughter, Beverly Terpening of Poca, half-brother, Dr. Robert Kellison, wife, Larita of Cary, NC., his children, Dr. Kimberly Kellison, husband, George, and son Dr. Todd Kellison, wife, Greta of Morehead City, NC. Step-grandchildren, Paula Nelson, her sons, Danny, Trey and Bobby, step-grandson, Ralph Terpening, and his daughter, Samantha. She was predeceased by her biological mother, Lillian Sharp Kellison of Marlinton, half-brother, Jack Kellison of Aborvale, half-sisters, Jean Van Reenan of Beckley, Lucy Moore of Marlinton and Rose Kordoes of Cape Coral, Florida. Also, a step-grandchild, Robert Terpening. A tremendous debt of gratitude to Helen Carter, Jeanne Brewster and Sharon Lyons for their love and caring in this final phase of her life. Funeral service will be held at 12:30 pm, Thursday, December 20, 2018 at Chapman Funeral Home, Hurricane with Reverend Charles “Sonny” Williams and Dr. Kyle Key officiating. Her entombment will follow next to Ray at Cunningham Memorial Park, St. Albans. Visitation will be from 11:00am until service time, Thursday at the funeral home. In lieu of flowers, a donation to the P Shinn Nitro High School Scholarship, at the Putnam County Bank would be appreciated. You may share memories of Mrs. Shinn by visiting her tribute page at ChapmanFuneralHomes.com Chapman Funeral Home, family-owned and located at 3941 Teays Valley Road, Hurricane is honored to serve the Shinn family.

The family of Patricia C. Shinn created this Life Tributes page to make it easy to share your memories.

Send flowers to the Shinn family.