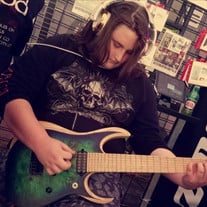 Paul Michael Flowers, 19, of Nitro, passed away Monday February 4, 2019. Paul was a 2017 graduate of Nitro High School. One thing Paul will be remembered for was his love of music. His family and friends will remember him as a gifted musician, much-loved son, brother and faithful friend. Paul’s instrument of choice was the guitar. He was self-taught and played by ear. He had an appreciation for music and enjoyed a variety of genres, his favorite was rock/metal. Paul and his parents had a connection through their love of music. He often attended concerts with his mother and father or spent hours discussing bands and songs with them. Paul was a former wrestler, from peewee up to a state travel league, he excelled in 8 seasons of wrestling. He was also a loyal New England Patriots and Tom Brady fan. He was so happy to see his beloved Patriots win their sixth championship this year. Paul was many things to many people; he loved his family, especially his little sister. He loved his friends and he loved his music. We will miss Paul and want to honor and celebrate his life. The light he brought into our lives will never dim. He was preceded in death by his maternal grandparents, Jon Blevins and Helen Blevins, both of St. Albans. He is survived by his parents; Diane Blevins Flowers of Nitro, Brandon Flowers and Brittany Marcum of Winfield; sister, Emma Flowers; brothers, Waylen and Braxton O’Dell; paternal grandparents, Roger Lee Flowers of Sissonville and Donna Lee Mass of Oklahoma; uncles, Michael Thomas Blevins of St. Albans and Paul Kenneth Blevins of St. Albans; aunts, Donnette Klosterman and Amber Rowley, both of Oklahoma; as well as cousins, other family and friends. Funeral service will be held at 2:00pm Tuesday February 12, 2019 at Chapman Funeral Home, Hurricane with his uncle Paul Blevins and family friend Rev. Kevin Farmer officiating. Burial will follow in Tyler Mountain Memory Gardens, Cross Lanes. Visitation will be one hour prior to the service at the funeral home. In memory of Paul, the family requests for you to come to his service just as you are, don't feel obligated to come in a suit. Wear your favorite band t-shirt, patriot gear, cargo shorts, etc. However you want to dress, to celebrate Paul. Chapman Funeral Home, family-owned since 1959 and located at 3941 Teays Valley Road, Hurricane is honored to serve the Flowers family.

Paul Michael Flowers, 19, of Nitro, passed away Monday February 4, 2019. Paul was a 2017 graduate of Nitro High School. One thing Paul will be remembered for was his love of music. His family and friends will remember him as a gifted musician,... View Obituary & Service Information

The family of Paul Michael Flowers created this Life Tributes page to make it easy to share your memories.

Send flowers to the Flowers family.