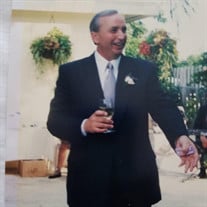 Randolph Louis “Randy” Roswell, 66, of Scott Depot went home to be with the Lord Saturday, September 12, 2020. Born September 7, 1954 in Washington, DC, he was a son of the late William and Wanda Kessell Roswell. He was also preceded in death by sister, Deborah Roswell. Surviving Randy are his wife, Terry; son, Shawn Pratt, his wife, Carrie and their daughter, Dagen of Burke, VA; step-mother, Jeannie Roswell of Maryland; siblings, William Roswell (Kathy) of New Jersey, Laura Colangelo (Larry) of New Jersey, Theodore Roswell (Lynn) of Florida, Richard Roswell of New Jersey, Mary Herron (David) of New Jersey, Teresa Schmidt (David) of New Jersey, Nancy Roswell of New Jersey, Patricia Constantine (David) of New Jersey, Maureen Schmidt (Ken) of New Jersey; as well as several nieces and nephews. Also surviving is his brother-in-law, Carman Allawat of Charleston. Randy retired in 2007 as the Vice-President/Manager of Time Warner Cable, with offices in Clarksburg, WV, New York, Connecticut, Virginia and North Carolina. During his career with Time Warner Cable, he was one of seven gentlemen responsible for the development of their internet service in 1995. He served as president of the Chamber of Commerce in Horeseheads, NY where he also was a member of the Kiwanis Club and also enjoyed golfing. Randy was a devout Catholic and truly has never met a stranger. Celebrations of his life will be held at a future date. Until then, you may visit his tribute page at ChapmanFuneralHomes.com to share memories and offer condolences to the family. Memorial contributions in his honor should be directed to your local Ronald McDonald House. Chapman Funeral Home and Crematory, family-owned and located at 3941 Teays Valley Road, Hurricane is honored to serve the Roswell family.

The family of Randolph Louis "Randy" Roswell created this Life Tributes page to make it easy to share your memories.

Send flowers to the Roswell family.