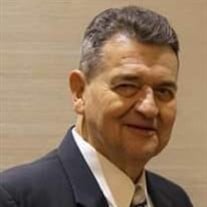 Reginald T. Hart, 73, of Hurricane, WV went peacefully to be with his Lord on Tuesday May 11, 2021. He was surrounded by his loving family. Reg was born in Mason, WV the first child of James L. and Martha E. Hart. He was later joined by his siblings Alan, Jayne and Brent and later in life a little sister Jamell. A graduate of Wahama High School, a recipient of a football scholarship to Glenville State College, he served in the United States Army as a Psychiatric Corpsman and finished his education graduating from Marshall University in 1973 with his Bachelor's Degree in Education. Employment opportunities in pharmaceutical sales and management enabled Reg to move his young family to the northern panhandle of West Virginia and build their first family home in Wheeling. A drive for excellence in his work opened career moves throughout West Virginia, into Tennessee, and eventually back home where he was able to retire. Reg was a Kentucky Colonel, and was an active and involved member of Forrest-Burdette United Methodist Church. He was a lifelong student of history. He enjoyed gardening, cooking, being outdoors, hunting for food, taking in a sporting event, and enjoying the company of his friends and family, especially beside the ocean. Reg lived for his family, and family was his joy. It was rare for any family milestone or event to pass without his boisterous laughter, his calming presence, his deep respect for tradition, and his boundless love for everyone he cared for. He is known as the Rock, the Manager, the Cornerstone, and the Heart of the family. Reg received a gift of life through organ donation in 2014. He and his family were very grateful for this gift and the time it allowed him to spend enjoying an active life, travel, and his grandchildren. Reginald is survived by his beloved and adoring wife of 51 years, Jennifer L. Hart. They fell immediately in love at the ages of 15 and 13. Reg and Jennifer have two daughters: Regina L. Hart-Smith (Huntington, WV), wife of Mark J. Smith and mother of their grandchild Elijah M. Smith (18). Allison M. Curtioff (Marshall, NC) wife of Bradley R. Curtioff and mother of their grandchild Gwendolyn L. Curtioff (12). His loyal canine companion Ms. Sophie misses him very much, as do Reg's cousins, friends, fellow church-members, nieces, nephews, former colleagues, and neighbors. He was preceded in death by his loving parents James and Martha, his beloved in-laws William L. and Lilah J. Zerkle, his baby sister Rhonda Lynn Hart, his Grandmother Freda A. Hart, his nephew Robert W. Thomas and a host of family members he loved deeply. The loss of Reg is a loss to his family, friends, colleagues, his church, the community, and humanity. May those who love him find the strength to walk in his footsteps in love and service to each other and God. Final arrangements are being handled by Chapman Funeral Home in Teays Valley, WV Calling hours Tuesday 6-8pm Forrest-Burdette United Methodist Church in Hurricane, WV Wednesday 12:45pm-1:45pm FBUMC Celebration of Life Wednesday 2pm FBUMC Interment following the Celebration of Life in Point Pleasant, WV Reg loved flowers and they are welcome. Donations to the National Kidney Foundation are also appreciated as an option to honor Reg. www.kidney.org The family also politely requests those who loved Reg consider registering as organ donors. www.donatelife.net "Warriors are not what you think of as warriors. The warrior is not someone who fights, for no one has the right to take another life. The warrior, for us, is the one who sacrifices himself for the good of others. His task is to take care of the elderly, the defenseless, those who cannot provide for themselves, and above all, the children, the future of humanity." -Sitting Bull

Reginald T. Hart, 73, of Hurricane, WV went peacefully to be with his Lord on Tuesday May 11, 2021. He was surrounded by his loving family. Reg was born in Mason, WV the first child of James L. and Martha E. Hart. He was later joined by his... View Obituary & Service Information

The family of Reginald T. Hart created this Life Tributes page to make it easy to share your memories.

Send flowers to the Hart family.