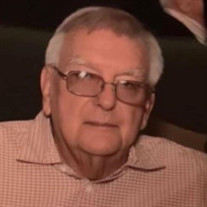 Richard A. Boehm, Sr., 79, of Winfield went home to the Lord Friday, August 20, 2021 after a long illness. Born February 2, 1942 in Pittsburgh, PA, he was a son of the late Richard and Helen Boehm. He is also preceded in death by two loving wives, Linda Boehm and Judith Boehm. Following high school graduation, Richard had the honor of serving his country with the United States Army in Korea. Later, he volunteered his service again in Vietnam. Upon his return from the military, he received his Bachelor of Arts degree in Business from the University of Pittsburgh while working. After college graduation, he began a 39 year career with EI Dupont de Nemours. Richard is survived by two daughters and one son, Lauri Dyer of Milton, Richard A. Boehm, Jr. and his wife, Kara of Scott Depot, Emily Kearns and her husband, Jeff of Red House; brother, Thomas Boehm and his wife, Nancy of Beaver Falls, PA; sister, Helen Damiano of Bethel Park, PA; eight grandchildren, Olivia Dyer, Luke Dyer and Leah Dyer of Milton, Isabella Boehm of Scott Depot and Meagan Kearns, Cameron Kearns, Micah Kearns and Malia Kearns of Red House; his beloved pet, Sadie; and special friends, W.K. and Sherrie Munsey, John and Wanda Perkins, Melinda Burden. A celebration of his life will be held at 2pm Tuesday, August 24, 2021 at Chapman Funeral Home, Hurricane. Burial will follow in the Donel C. Kinnard Memorial State Veterans Cemetery, Dunbar. Visitation will be held from 6-8pm Monday at the funeral home. You may also visit his tribute page at ChapmanFuneralHomes.com to share memories and offer condolences to the family. In lieu of flowers, memorial donations in his honor should be made to the Sweet Julia Grace Foundation, 9000 Mike Garcia Dr., # 140, Manassas, VA 20109 (sweetjuliagrace.org) Chapman Funeral Home, family-owned and located at 3941 Teays Valley Road, Hurricane is honored to serve the Boehm family.

Richard A. Boehm, Sr., 79, of Winfield went home to the Lord Friday, August 20, 2021 after a long illness. Born February 2, 1942 in Pittsburgh, PA, he was a son of the late Richard and Helen Boehm. He is also preceded in death by two loving... View Obituary & Service Information

The family of Richard A. Boehm Sr. created this Life Tributes page to make it easy to share your memories.

Send flowers to the Boehm family.