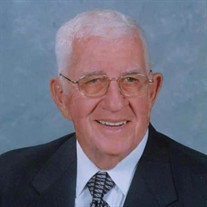 Richard Lawrence “R. L.” Hanson, Sr., 93, of Scott Depot passed away on Wednesday, June 15, 2022 at Cabell Huntington Hospital. Richard was preceded in death by his parents, Stella Mae and William J. Hanson and his brothers, Charles W. Hanson, Earl T. Hanson and James B. Hanson. In 1950, he married his wife of 72 years, Ida Blanche Morris Hanson, who survives him along with sons Richard L. Jr. of Winston-Salem, NC, Thomas A. (Mary Pat) of Charlottesville, VA, William C. “Corky” (Tammy) of Sarasota, FL, Terrence W. (Kathy) of Culloden, WV and Susan C. Kennedy (Shawn) of Garner, NC. He is also survived by brothers, William F. Hanson of WinstonSalem, NC and Robert A. Hanson of Hurricane, WV. He is survived by 11 grandchildren, Eric Hanson, Greg Hanson, Tim Hanson, James Hanson, Katherine McPherson, Andrew Hanson, Michelle Roynak, Taylor Hill, Adam “A. J.” Hanson, Jennifer Johnson and Scott Dooley. He is also survived by 14 great-grandchildren Noah and Luke Hanson, Hadleigh and Harper Hanson, Lindell and Levon Hanson, Miller McPherson, Waylon Hanson, Maci Hanson and Kinley Hill, Peyton Hagen, Madeline, Caroline and Ryan Johnson and soon to arrive great grandson, Brayden Michael Hill. Also surviving are numerous nieces and nephews whom their Uncle Richard loved very much. Richard, a WWII Veteran, was born in Mann, West Virginia on July 17, 1928. Born during the depression, his family soon moved to Charleston. When the Japanese attacked Pearl Harbor he was 13 years old, delivering newspapers for the Charleston Daily Mail. Richard later graduated early from Charleston High School so he could enlist in the United States Army, serving in the Pacific Theater in the Occupation of Japan during WWII. After his military service, he was co-owner of the East End Supermarket grocery store. He worked eight years at Union Carbide at Institute and later went to work for Western Southern Life Insurance with 30 years of service. After his retirement from Western Southern, Richard was elected as the Putnam County Assessor, where he served for eight years. Richard was involved in local democratic politics, where he served as the Chairman of the Putnam County Democratic Executive Committee and was a past member of the Winfield Lions Club. Having moved to Scott Depot in 1952, Richard loved Putnam County, mowing his grass, Sunday dinners and football in the front yard, having his grandkids around him, especially for Easter Egg Hunts. At the annual 4th of July softball games, Richard made sure every kid got to play and the games always ended in a tie. Stories are still being shared, and always with laughter, about the trout fishing trips with his father, brothers, sons and nephew. Hunting was a part of his earlier life as well. Horseshoes with his brothers and all the family from Kentucky will be the tales that will continue to be told by all the family for years to come. Having lived a long, wonderful life, memories with Richard are numerous and will be in the hearts of the family he loved so much forever. Service will be 1:00 pm Monday, June 20, 2022 at Chapman Funeral Home, Winfield, WV with Pastor Mark E. Kilburn officiating. Visitation will be one hour prior to the service at the funeral home. Burial will follow in Winfield Cemetery. You may share memories of Richard by visiting his tribute page at ChapmanFuneralHomes.com Chapman Funeral Home and Crematory, family-owned and located at 12848 Winfield Road, Winfield, WV is honored to serve the Hanson family.

The family of Richard Lawrence Hanson created this Life Tributes page to make it easy to share your memories.

Send flowers to the Hanson family.