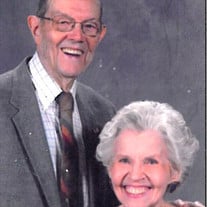 RICHARD BYRON LARSON, age “96½” as he recently referred to his age, passed away January 22, 2019 at Hubbard House West in South Charleston. His soul peacefully departed this world to be with GOD and to join his beloved wife Frances. Richard was a kind and loving husband, father, grandfather, and great-grandfather. He was the son of Ernest and Esther Larson; the husband of Frances “Fran” Larson; and brother of Valerie Burns, all of whom preceded him in death. He is survived by his sons: Keith and Mark (Mita) of St. Albans; and Laurence (Eva) of Midland, Michigan; grandson Robert and his children Skyler and Ty; grandson David (Debora) and their son Nathaniel; grandson John Andrew (Tressa) and his children Esmeralda and Phoenix; and grandchildren Daniel and Natalie Larson. He is also survived by his loving niece Carol Verre (Mario) and her family and his nephew Larry Burns (Cindy) and other relatives in Chicago. Richard was a chemical engineer who retired from Union Carbide. While earning his degree from Illinois Institute of Technology, he was editor of the student newspaper; president of Pi Delta Epsilon, the national honor student journalism fraternity; and captain of the tennis team. He also held positions in several engineering societies. Upon graduating during World War II, Richard applied for a commission as a naval officer, but was turned down due to his employment in the atomic energy program (working on the atomic bomb). After coming to West Virginia to work for Union Carbide, Richard became a founding member of Grace Lutheran Church in St. Albans. He was a member of Cross of Grace Lutheran Church in Hurricane at the time of his death. Richard had a great sense of humor and loved to tell jokes and stories. He was an avid reader and a fan of WVU football and basketball, particularly the Chicago Cubs and Bears. He was a perfect example of someone who never met a stranger. We will always carry his memory in our hearts. The family is grateful for the compassionate care provided by the staff at Hubbard House. In lieu of flowers, donations may be made to: Hospice Care (1606 Kanawha Blvd West, Charleston, WV 25387); or Cross of Grace Lutheran Church (515 Hurricane Creek Rd, Hurricane, WV 25526). The family is also especially grateful to D. R. Layton (neighbor) and his family. * A service to honor Richard will be held at 2:00 pm Saturday, January 26, 2019 at Bartlett-Chapman Funeral Home, St. Albans with Rev. James Wicker and Rev. Clifford Smith. Entombment will follow in Cunningham Memorial Park, Lower Mausoleum Chapel St. Albans. * Visitation will be held one hour prior to the service at the funeral home. You may visit Richard’s Tribute page at chapmanfuneralhomes.com to share memories or condolences with the family. Bartlett-Chapman Funeral Home, family owned and located at 409 Sixth Ave., St. Albans is honored to serve the Larson family.

RICHARD BYRON LARSON, age &#8220;96½&#8221; as he recently referred to his age, passed away January 22, 2019 at Hubbard House West in South Charleston. His soul peacefully departed this world to be with GOD and to join his beloved wife Frances. Richard... View Obituary & Service Information

The family of Richard Byron Larson created this Life Tributes page to make it easy to share your memories.

Send flowers to the Larson family.