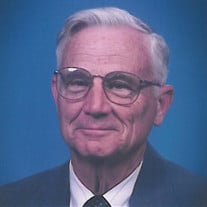 Robert C. Ellis of Saint Albans, West Virginia, departed this life on January 15, 2019. He was born on October 14, 1928 in Ottawa, West Virginia, to the late Robert Lee and Lucille Mahon Ellis. He graduated from Sherman High School in 1945 at the age of 16. He thereafter began his career at Union Carbide Corporation in South Charleston in the mail room. He received training and became a draftsman there and rose in the management and engineering ranks over a 41- year career until he was group leader of piping design engineering at the time of his retirement in 1986. He served in the United States Marine Corps Reserve, receiving an Honorable Discharge as a Private First Class on October 22, 1954. He joined the First Baptist Church of Saint Albans in 1962 and served repeatedly there as a deacon and trustee over nearly five decades. He met Carolyn Sue Beane, the love of his life, in St. Albans in 1948 and married her on October 29, 1949. He is survived by Carolyn, his devoted wife of 69 years who faithfully cared for him in his years of decline, their three children and spouses: Larry and Jennifer Andrews Ellis of St Albans; Teresa Ellis Taylor and Vernon Taylor, also of St. Albans; and Lisa Ellis Seel and Rhett Seel of Harrisburg, North Carolina; and by his grandchildren: Katie and Scott Ethridge of Teays Valley; Luke Ellis, of Cross Lanes; Caleb Ellis, of Charleston; Matt Seel, of Raleigh, North Carolina, and Jessie Seel of Harrisburg, North Carolina; and by his two great-granddaughters, Ava and Sophie Ethridge. He was preceded in death by his two sisters, Katherine Barker of Charleston and Jeanette Poe of Saint Albans. He was a loving husband and a wise and strong father and grandfather who worked his entire life for the betterment of his family. His Christian faith was genuine and profound. He deeply loved his family and rejoiced in their times together at home in St. Albans, by the hearth in winter and on the back porch in summer, and on their trips elsewhere, to the lake and to the beach. He loved his church and was widely known and loved in the fellowship there. In his youth he was a fine third baseman, playing on several teams in the industrial leagues in the late 1940s and 50s. He loved sports, especially baseball, and he toughed it out as a loyal fan of the Cincinnati Reds for seventy years. He was an avid golfer and fisherman. He loved poetry, from Shakespeare to Wendell Berry, and even in his last years could recite sonnets he had learned in high school. The first and last words of his life are love. We are grieved in our loss and know that, this side of Jordan, we shall not look on his like again. Our comfort is in the promises of the Savior he knew and devotedly served - the promises of joyful reunion, everlasting life, and all-fulfilling love. Funeral services will be held at 2:00 pm Friday, January 18, 2019 at Bartlett-Chapman Funeral Home, St. Albans with the Rev. Joel M. Harpold officiating. Burial will follow in Cunningham Memorial Park, St. Albans. Friends may call from 12 to 2:00 pm prior to the funeral service. The family requests that in lieu of flowers gifts be made to Hubbard Hospice House, West, In Memory of Robert C. Ellis, 4605-A MacCorkle Ave., South Charleston, WV 25309. You may visit Bob’s tribute page at chapmanfuneralhomes.com to share memories or condolences with the family. Bartlett-Chapman Funeral Home, family owned and located at 409 Sixth Ave., St. Albans is honored to serve the Ellis family.

Robert C. Ellis of Saint Albans, West Virginia, departed this life on January 15, 2019. He was born on October 14, 1928 in Ottawa, West Virginia, to the late Robert Lee and Lucille Mahon Ellis. He graduated from Sherman High School in 1945... View Obituary & Service Information

The family of Robert C. Ellis created this Life Tributes page to make it easy to share your memories.

Send flowers to the Ellis family.