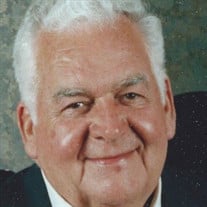 Robert Lee Foster, Sr., 89, of Walker Chapel Ridge, Putnam County, passed away Monday, May 11, 2020 at Riverside Health and Rehabilitation Center in St Albans, WV. Robert “Bob” Foster was born January 15th, 1931 in Belle, WV. He was the son of James F. Foster and Sarah Elizabeth Boyd Foster of Belle. He was preceded in death by his wife, Fay Romine Foster; his sisters, Nancy Ann Walker and Shirley Searls. He is survived by his sister, Doris Fix of Dunbar; his brother Ray Foster of Huntington; his sons, Robert Foster, Jr. and wife Barbara of St Albans; Stephen Foster and wife Denise of Scott Depot, Michael Foster and wife Missy of Scott Depot, Barrie Foster and wife Rebecca of Milton; his grandchildren, Robin Foster of Brisbane Australia, Julie Foster of New York City, Daniel Foster of St. Albans, Laura Priestly and husband, Chris, of Morgantown WV, Joseph Foster of Shinnston WV, Shane Foster of Scott Depot WV, Jacob Foster of Scott Depot WV, Ashley Deal and husband, Zach, of Scott Depot, Cory Foster and wife Amanda of Brunswick Ohio, Stacy Synder and husband Michael of Fraziers Bottom WV; and his great-grandchildren: Luke, Matthew, Elianna, and Isaiah Priestly, Beau and Anna Fay Deal, Lily and Owen Snyder; and many nieces and nephews. Bob graduated from DuPont High School in 1949 where he lettered in basketball and, at 5’11”, jumped center against 6’9” eventual WVU All-American Mark Workman. After high school, he began working for C&O Railroad. He was then employed by WV American Water, before taking a job with Union Carbide, working at the Tech Center and the Institute facilities for thirty-eight years, retiring as a senior draftsman. He coached Little League baseball where he developed multiple All-star team starters, but more important to him, he helped underprivileged kids gain self-esteem and have their moment in the spotlight. In the mid-1970’s, he and Fay bought Windridge Farm in Putnam County, building a beautiful home where the Foster Family gathered as often as possible, creating countless, priceless memories. Bob loved to play golf, go fishing and hunting, work in his gardens, raise cattle, and make homemade ice cream for the grandkids, after attempting to charge them rent for the overnight visits at the Farm. He and Fay attended Walker Chapel Church. He was known as a protective but gentle man, with a warm heart. He could reliably be found on his tractor taking his grandchildren for hayrides, or in his armchair reading his paper, or splitting wood for the family room fireplace. He always made it to his sons’ sporting events, and his grandchildren’s as well, no matter how many of them came along. Perhaps his favorite activity was enjoying a meal made by his wife, whom he adored. He will be remembered as a father, grandfather, brother, and friend. His family will sorely miss him, but they know he is now where he belongs: together again with his sweetheart, Fay, to whom he was married for almost sixty years. We will miss his ornery laugh, but we wish him the peace and rest he so richly deserves, and we look forward to seeing him again. There will be a memorial service at a later date. Until then, you may visit his tribute page at ChapmanFuneralHomes.com to share memories and offer condolences to the family. Anyone wishing to remember Bob with a memorial contribution may send it to the Putnam County Parks non-profit organization. Checks can be made to “Friends of the Park” with “Robert Foster Memorial” in the memo line. Send to: Putnam County Parks, 1 Valley Park Drive, Hurricane WV 25526. The donations will be used to place a memorial bench by the fishing pond. Chapman Funeral Home, family-owned and located at 3941 Teays Valley Road, Hurricane is honored to serve the Foster family.

The family of Robert Lee Foster created this Life Tributes page to make it easy to share your memories.