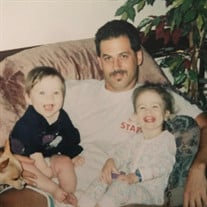 On May 1st, 1963, in Charleston, West Virginia, a beautiful brown eyed boy was born to Patsy Anne (Parsons) Wines, whom she named Roger Gale. He grew to be a skinny and lanky boy. Nine years later, after a brief stay in Michigan, and after moving... View Obituary & Service Information

The family of Roger Gale Wines created this Life Tributes page to make it easy to share your memories.

Send flowers to the Wines family.