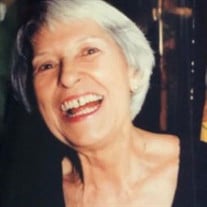 Rosemary Murray Clendenin passed away after a brief illness on Thursday, May 28, 2020, in Palm Bay, Florida. She was preceded in death by her parents, Lawrence B. Murray and Minnie A. Murray and the husband she adored, Albert Dale Clendenin. She is survived by three daughters, Kathryn Sandy (Mark), Jayne Pauley (Bob), and Janet Williams (Jerry). She also leaves behind six grandchildren and seven great-grandchildren. Rosemary was born September 21, 1932. She was a 1950 graduate of St. Albans High School. A life-long learner, volunteer, true Red Dragon she surely was. She chaired the Main Street Memory in 2000 and was the All-Class Reunion Program Editor-in- Chief in 2004. As a member of the SAHS Alumni Association, she took great pride in the Association's ten thousand dollar contribution to the Kanawha Valley Foundation. Rosemary was a Girl Scout leader, ran the St. Albans Day Camp for numerous years, and enjoyed directing the Camp Clyde Browder Swim Camp. She was presented the Volunteer of Excellence Award by the Mountain Laurel Girl Scout Council. Rosemary taught swimming for the Red Cross in Putnam and Kanawha Counties, and served several terms on the Red Cross Board. Proud of her mountain state, Rosemary gave Step-On tours. Extensive research and a lively personality made her tours interesting and popular. Proud of her Irish heritage and her Roman Catholic faith, Rosemary donated many hours to hot dog sales, bake sales, Mardi Gras parties, bereavement dinners at St. Francis of Assisi in St. Albans and later, Holy Trinity in Nitro where she was a lector. If anyone wanted something accomplished, they contacted Rosemary. A celebration of her life will be held at Holy Trinity Church in Nitro, WV on Saturday, June 13, 2020. Presided over by Father Leon Alexander, Mass begins at 11:00 am. She will be laid to rest beside Albert Dale in Fairplain Cemetery in Ripley following the service. You may also visit her tribute page at ChapmanFuneralHomes.com to share memories and offer condolences to the family. In lieu of flowers, she requested donations be made to Holy Trinity Catholic Church, 2219 22nd Street, Nitro, WV 25143, St. Francis of Assisi Catholic Church, 1023 Sixth Avenue, St. Albans, WV 25177 or Black Diamond Girl Scout Council, 321 Virginia Street, West, Charleston, WV 25302. The family thanks Brownlie-Maxwell Funeral Home in Melbourne, Florida and Chapman Funeral Home in Winfield, WV for their support. Chapman Funeral Home, family-owned and located at 12848 Winfield Road, Winfield is honored to serve Rosemary and her family.

Rosemary Murray Clendenin passed away after a brief illness on Thursday, May 28, 2020, in Palm Bay, Florida. She was preceded in death by her parents, Lawrence B. Murray and Minnie A. Murray and the husband she adored, Albert Dale Clendenin.... View Obituary & Service Information

The family of Rosemary Murray Clendenin created this Life Tributes page to make it easy to share your memories.

Rosemary Murray Clendenin passed away after a brief illness on...

Send flowers to the Clendenin family.