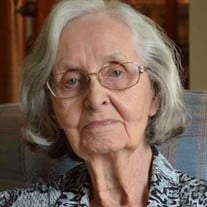 Ruth Virginia Ellis, 100, of Hurricane passed away, Wednesday, May 6, 2020 at her beloved home with her sons at bedside. This is exactly the way she wanted it to be. Born October 27, 1919 in Hurricane, she was the daughter of Charles Clyde... View Obituary & Service Information

The family of Ruth Virginia Ellis created this Life Tributes page to make it easy to share your memories.

Send flowers to the Ellis family.