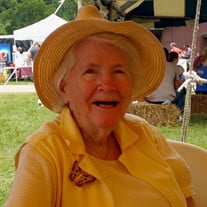 Sheila Janice Wright, 93, of Winfield went home to be with the Lord Thursday, September 17, 2020 at Bellaire at Devonshire. Born February 26, 1927 in South Charleston, she was a daughter of the late Howard Francis and Clara Mae Jarvis Eberhart. She was also preceded in death by her husband, Emory Luther Wright; sisters, Virginia and Zelda. After graduating from South Charleston High School, Janice was one of the few women accepted at the RCA Institute, New York City. Upon completing her studies there, she worked as a radio operator for the West Virginia State Police for nine years. She was an accomplished seamstress and owned her own ceramic shop at one time as well. Born to be a mother, Janice dedicated a large part of her life to children, both her own and others. She was homeroom mother, Winfield High School Band Booster and was very active for over 20 years with Putnam County 4-H programs and camps where she won top awards and assisted homesick campers as well as served as the camp nurse. She was always available to help people. During WWII, she was a proud Rosie the Riveter. She was a member of Winfield United Methodist Church for 55 years. Surviving are her children, Dale Wright of Winfield, Glen Wright (LaWanna) of Charleston, Robin Wright Masters (Jonathan) of Chicago, IL, Carolyn Wright Hatchell (Jimmy) of Winston-Salem, NC; sister, Lt. Col. Carolyn Jeanine “Jean” Eberhart Ret. of Tampa, FL; three grandchildren, Hannah, Nathan and Megan. A celebration of Janice’s life will be held at 2pm Wednesday, September 23, 2020 at Heaven’s Gateway Cemetery, Winfield with Pastor Christopher Scott officiating. In lieu of flowers, memorial contributions may be directed to either Winfield United Methodist Church, PO Box 391, Winfield, WV 25213 or to the Putnam 4-H Leaders Association c/o WVU extension Service-Putnam County, 12093 Winfield Rd., Suite, 6, Winfield, WV 25213. Chapman Funeral Home and Crematory, family-owned and located at 12848 Winfield Road, Winfield is honored to serve the Wright family.

Sheila Janice Wright, 93, of Winfield went home to be with the Lord Thursday, September 17, 2020 at Bellaire at Devonshire. Born February 26, 1927 in South Charleston, she was a daughter of the late Howard Francis and Clara Mae Jarvis Eberhart.... View Obituary & Service Information

The family of Sheila Janice Wright created this Life Tributes page to make it easy to share your memories.

Sheila Janice Wright, 93, of Winfield went home to be with the...

Send flowers to the Wright family.