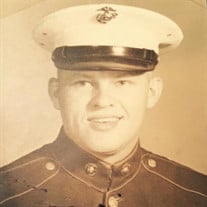 Steven William Woodyard, 75, formerly of South Point, OH, passed away Wednesday, July 17, 2019. Born January 3, 1944, he was a son of the late Alvin W. and Ursula Gilcoine Woodyard. Steve was also preceded in death by his sisters, Marcia Barry, Christine Watkins; brother, Robert Woodyard; niece Lori Burgess. Steve served his country proudly with the United States Marine Corps during Vietnam. He was a local driver for Yellow Freight and served as a part-time police officer in South Point, OH. Steve loved to cook for his family and friends. Among his most requested dishes were his chili, goulash and his infamous pasta salads. He is survived by his children, Melissa Day, Stephanie Woodyard, Jamey Woodyard and Melinda Ester; grandchildren, Justin Starcher (Cherie), Kaleal and Maycee Ester, Rachael, Morgan and MacKenzie Day; one great-granddaughter, Brailenn Starcher and one great-grandson expected in late July, 2019. Also surviving are his brother-in-law, Fred Watkins and sister-in-law, Kathy Woodyard as well as numerous nieces, nephews and cousins. A private service will be held at a later date. You may visit his tribute page at ChapmanFuneralHomes.com to share your memories of Steve. Memorial contributions in his honor, may be directed to Shining Star, 3044 Mount Vernon Road, Hurricane, WV 25526. Chapman Funeral Home, family-owned and located at 3941 Teays Valley Road, Hurricane is honored to serve the Woodyard family.

The family of Steven William Woodyard created this Life Tributes page to make it easy to share your memories.

Send flowers to the Woodyard family.