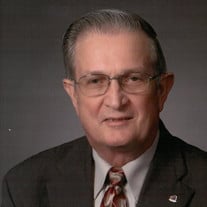 Talmadge “Gene” Adkins, 80, went home to be with the Lord Friday, February 7, 2020. He was preceded in death by his wife of 50 years, Carnella “Carlena” Kessinger Adkins and granddaughter, Sharel Antiva Holiday. Gene is survived by three children, Marvin Adkins (Marcia), Robin Adkins Holiday (Tom), Jonathon Adkins (fiancé, Sumer Henderson); three grandchildren, Gregg Holiday (fiancé, Natalie Mello), Erica Holiday, Katie Felitsky and four GREAT grandchildren, Ace Sylvia, Del Rowe and newborn twins, Tru and Ivy Holiday. Raised by his grandparents, Herschel and Mattie Sowards as a tobacco farmer he was an only child of Mineral and Sybol Sowards Adkins who passed away giving birth. He was well-loved by his step mother, Bessie Abbott Adkins. Gene was a member of the Winfield Church of Christ for 39 years where he served as a Deacon for many of those years, raising his family in Christ’s love, making sure his family attended whenever the church doors were open and, sometimes, when they weren’t. As a family, they all served cleaning, mowing and attending to other miscellaneous duties. He also drove the church bus, ensuring others could make it to church. He served our country as a communications specialist in the United States Army for three years and received medals for good conduct and marksmanship. Gene was a licensed electrician and also played the role of neighborhood plumber, painter and all around Handyman. He was a hero Master “Mr. Fix It” for all who knew him and loved by them all as he did it out of his Christian love. His main career in life was being a proud member of the Bricklayers and Allied Craftworks Union # 9 for over 50 years. He will be remembered as a beautiful, faithful Christian, a loving husband, father, PawPaw and uncle. Funeral service will be held at 12 Noon Saturday, February 15, 2020 at Chapman Funeral Home, Winfield. Burial will follow in Orchard Hills Cemetery, Yawkey. Visitation will be held from 6-8pm Friday at the funeral home. You may visit his tribute page at ChapmanFuneralHomes.com to share your memories with the family. Chapman Funeral Home, family-owned and located at 12848 Winfield Road, Winfield is honored to serve the Adkins family.

The family of Talmadge "Gene" Adkins created this Life Tributes page to make it easy to share your memories.

Send flowers to the Adkins family.