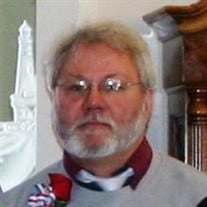 Theodore Ronald (Ted) Engle passed away in a hunting accident on Saturday, December 8, 2018 at the age of 60. Ted graduated from St. Albans High School in 1976 and enlisted in the United States Air Force. He received basic training while stationed in Texas and was then assigned to Hickam Air Force Base in Hawaii. Preferring to be on the East Coast, Ted requested a new assignment; and was stationed at Fort Meade in Maryland. Ted was immensely proud of the years he spent in the Air Force. Ted’s career as a carpenter began when he moved to Ohio and started working in the Amish community. His work with the Amish was a good learning experience and allowed him to fine tune his skills. Later, he moved to Charlotte, North Carolina where he continued his carpentry work. When he returned to West Virginia, he traveled to jobs not only in West Virginia, but Pennsylvania as well. Ted belonged to the Carpenter’s Union in Parkersburg. After many years of hard work, Ted decided to retire this summer. He wanted to spend his time playing golf, fishing, and hunting. He especially liked to hunt with a muzzleloader. He wanted to experience the technique his ancestors had used when hunting. Ted is preceded in death by his parents, Charles Clyde Sr. and Pearl Samples Engle; brothers, Randy W. and Jerry L. (Chip) Engle. He is survived by his sister, Betty Engle Farmer and her husband, Bill of Deltaville, VA; his brothers, Charles C. Engle Jr. and his wife, Patti of Elkview; Cody P. Engle and his wife, Franci of Winfield; Rodney J. Engle and his wife, Lynn of Winfield; and Richard G. Engle of Glen Allen, VA. He is also survived by one nephew, David Farmer and his wife, Emily and their two sons Christopher and Andrew of White Stone, VA. The funeral service will be 2:00 PM on Friday, December 21st at the Upper Mausoleum Chapel, Cunningham Memorial Park in St. Albans WV. Visitation with family and friends will be held one hour prior to the memorial service at the mausoleum chapel. Anyone that wishes to leave an online memory may do so at www.chapmanfuneralhomes.com Chapman Funeral Home located at 3941 Teays Valley Road, Hurricane is accommodating the Engle family.

Theodore Ronald (Ted) Engle passed away in a hunting accident on Saturday, December 8, 2018 at the age of 60. Ted graduated from St. Albans High School in 1976 and enlisted in the United States Air Force. He received basic training while... View Obituary & Service Information

The family of Theodore "Teddy" Engle created this Life Tributes page to make it easy to share your memories.

Theodore Ronald (Ted) Engle passed away in a hunting accident...

Send flowers to the Engle family.