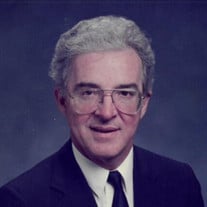 Veleair Courtlandt &#8220;Cort&#8221; Smith II, was born on June 13, 1931 in Charleston, West Virginia and passed away at age 90 on July 27, 2021 at Elmcroft Assisted Living in Hurricane, West Virginia. An only child, he was preceded in death... View Obituary & Service Information

The family of Veleair Courtlandt "Cort" Smith, II created this Life Tributes page to make it easy to share your memories.